Brooks: "I am humble and proud to induct him into the New York State Senate Veterans’ Hall of Fame." 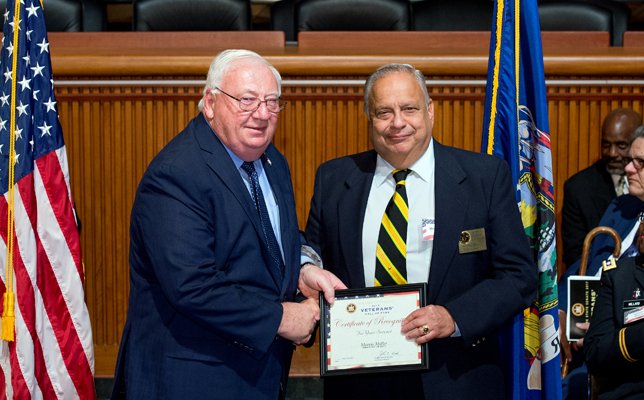 Albany, NY - May 19, 2017 - Senator John Brooks inducted Massapequa resident Sgt. Morris Miller into the New York State Veterans’ Hall of Fame to recognize him for his remarkable service and sacrifice to the nation. Senator Brooks honored Sgt. Miller in a ceremony held at the New York State Capitol in Albany on May 16th.
"Sgt. Miller’s service didn’t stop when he returned home,” said Brooks.  “He has lent his voice to be a voice for the veterans’ community to ensure that their needs and issues are understood and cared for. His selflessness and dedication to assisting fellow veterans is why I am humble and proud to induct him into the New York State Senate Veterans’ Hall of Fame.”
“I'm very honored and humbled to have been inducted into the New York State Veterans’ Hall of Fame,” said Sgt. Miller. “I thank Senator Brooks and the people of the 8th Senate District for this honor. I encourage everyone to volunteer with a veterans group to truly understand the debt we owe to our veteran community."
About Sergeant Morris Miller:
Sgt. Morris Miller (ret.), served as a forward observer in the United States Army during the Vietnam War.  In addition to his honorable service abroad, Sgt. Miller’s efforts after leaving the service are truly deserving of recognition and regard. Since leaving the service, he has tirelessly advocated for our nations active military service members and veterans.
A Massapequa resident for over 47 years, Sgt. Miller, has dedicated his life to assisting the men and women that have served in the United States military.
For almost 30 years, Sgt. Miller has lectured at colleges, high schools and middle schools, educating younger generations on the honor of service and the needs of the veteran’s community. He has volunteers over one thousand hours at the Northport V.A. Hospital aiding countless veterans as they seek medical treatment and rehabilitation. Furthermore, Sgt. Miller has advised numerous veterans organizations, including the Korean War Veterans and the Jewish War Veterans, on the benefits owed to veterans.
Sgt. Miller assisted former United States Representative Carolyn McCarthy with establishing a Veterans’ Advisory Committee, and currently sits on veterans’ advisory committees for Representatives Kathleen Rice and Lee Zeldin.  He remains an active member of the Vietnam Veterans of America and the Disabled American Veterans, and is the National Education Program Director for the Veterans of the Vietnam War.