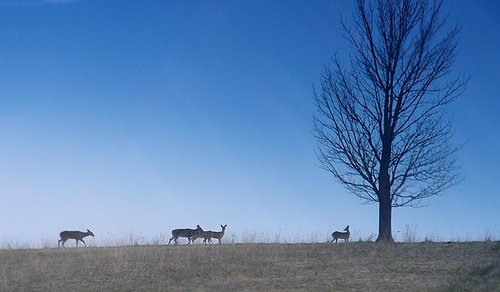 Albany, NY - May 19, 2015 - The New York State Department of Environmental Conservation (DEC) is now accepting public comments through June 29 on three regulatory proposals for hunting and trapping of wild turkey, deer and fisher, Commissioner Joe Martens announced today. The changes cover fall turkey hunting seasons in most areas of the state; modifications of antlerless deer hunting seasons in portions of western and southeastern New York and Long Island, and changes to the Deer Management Assistance Program (DMAP) procedures statewide; and reduction of the current fisher trapping seasons in northern New York, opening a limited new fisher trapping season in central and western New York, and clarification of general trapping regulations. Pending review of public comments on each of these proposals, some or all of the regulation changes could be in effect for fall 2015.

Proposed Fall Turkey Hunting Regulations
DEC is proposing to adjust fall turkey seasons in all areas of the state by limiting the season to two weeks only with a bag limit of one bird of either sex for the season.

"This proposal is an important step in a multi-year study to understand and respond to long-term declines in turkey populations, while maintaining some harvest opportunities," Commissioner Martens said. "DEC staff and our partners have worked hard over the past several years to collect and analyze information on the influence of habitat and weather on turkeys in different regions of the state, to understand what hunters want, and to assess seasonal survival and harvest rates of hen turkeys. This proposal is based on the results of those research endeavors."

As DEC and many hunters have noted, wild turkey populations have declined dramatically since their peak around 2001. Reasons for this decline include changes in habitat, higher predator populations, poor reproductive success in years with above average rainfall during the nesting season and harvest of hen turkeys during the fall season. Although conditions vary across the state, nearly all regions of New York have fewer turkeys today than in the past.

Since 2012, DEC biologists and researchers at SUNY ESF and Cornell University have worked to better understand the biological and social factors associated with turkey management. This includes:

The weather and habitat study indicated that the current configuration of fall turkey hunting zones is more complicated than necessary, and that four zones instead of six is more appropriate. The survey of fall turkey hunters indicated that the most important factors in their satisfaction are hearing and seeing birds and having the chance to go afield prior to the regular deer season. The banding study revealed that summer survival and fall harvest rates of hens are low, but reducing the harvest should result in higher turkey populations in the long-term.

Based on those studies, DEC concluded that the best way to enhance turkey populations while maintaining some fall hunting opportunity is to offer a two-week season in all areas of the state, with a seasonal limit of one bird of either sex. Season dates will be staggered among three broad regions, which will provide more avid hunters the chance to hunt turkeys for more than just two weeks: October 1-14 in the Northern Zone; October 17-30 in the Southern Zone; and November 21 - December 4 on Long Island (Suffolk County). This represents a reduced season length in most of the state and a modest increase in season length for Long Island.

The proposed fall hunting season changes will be evaluated as part of a four-year research program. DEC staff will continue to band and track hens in 2015 and 2016 to help evaluate the effects of fall season changes on hen harvest and survival. This information will be used along with information on turkey abundance, productivity, and hunter activity and harvest data collected annually, to determine future fall harvest opportunities that are sustainable under current environmental conditions and trends in turkey populations.

For more information or for instructions for submitting comments, go to the DEC website. Comments on the proposed fall turkey hunting regulations must be received by Monday, June 29.

Proposed Antlerless Harvest and DMAP Regulations
DEC is challenged to manage deer populations across a diverse range of environmental conditions and desired population levels. Currently, despite not issuing Deer Management Permits (DMPs) in Wildlife Management Unit (WMU) 6A in the St. Lawrence Valley since 2011, managers have identified the need to further restrict antlerless harvest to increase deer populations in that area of the state. Antlerless deer continue to be harvested during bow and muzzleloader hunting seasons, with the greatest harvest occurring during the seven-day early muzzleloader season. Over the past 25 years, DEC modified muzzleloader season opportunities in the Northern Zone, switching between either-sex, antlerless-only, or antlered-only as needed to achieve management objectives.

This proposed rule will restrict harvest during the early muzzleloader season to antlered deer only in WMU 6A until such time as populations increase to desired levels and the season may again be returned to an either-sex opportunity.

In stark contrast, antlerless deer harvest must be increased in WMUs 1C, 3M, 3S, 4J, 8A, 8C, 8F, 8G, 8H, 8N, 9A, and 9F, which include Suffolk County, portions of southeastern New York, and much of the Lake Plains and northern Finger Lakes area of central and western New York.

In these areas, deer populations are above levels desired by local stakeholders, resulting in unacceptable impacts to residents and local ecosystems. Offering increasing numbers of DMPs each year is no longer a productive way of increasing antlerless take in these areas because the supply has exceeded demand, so new strategies must be implemented to achieve greater antlerless deer harvests. Consistent with the DEC's Management Plan for White-tailed Deer in New York State, 2012-2016, this proposal will allow hunters to only take antlerless deer during the first 15 days of the early/regular bow season and during all of the late bow and muzzleloader seasons in the areas listed above.

For more information or for instructions for submitting comments, go to the DEC website. Comments on the proposed antlerless harvest and DMAP regulations must be received by Monday, June 29.

Public comments on the draft management plan were highly variable, ranging from strong support for the plan to concerns over the specific proposals for season timing and bag limits. DEC staff feels that the rationale for reducing fisher harvest in the Adirondacks and for opening a new trapping season in Central/Western New York remain valid, but additional public comment on the specific season dates and bag limits proposed at this time would be especially helpful. Public comments received on the proposed fisher regulations will further inform completion of the management plan. The draft plan is available on the DEC website - click here.

In addition to the proposed fisher trapping regulations, DEC is proposing to update and clarify several general trapping regulations. Minor revisions are needed to clarify the intent of the regulations and to make them easier for trappers to understand and law enforcement officers to enforce. Some of these proposed regulation changes include:

For more information or for instructions for submitting comments, go to the DEC website. Comments on the proposed fisher trapping and general trapping regulations must be received by Monday, June 29.