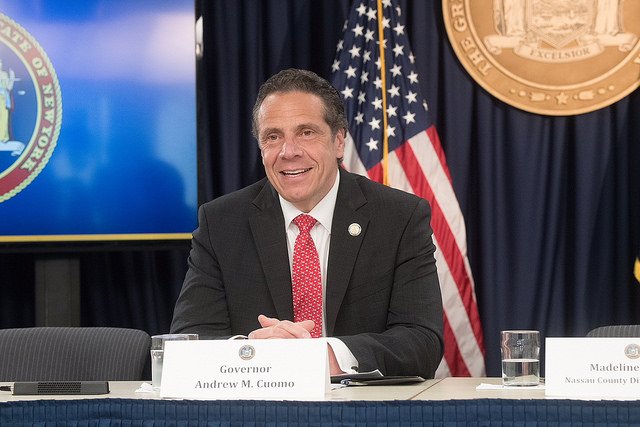 Albany, NY - May 17, 2018 - Governor Andrew M. Cuomo today announced that at his direction, the New York State Department of Environmental Conservation released proposed regulations to require all power plants in New York to meet new emissions limits for carbon dioxide (CO2), a potent greenhouse gas that contributes to climate change. The regulations, a first in the nation approach to regulating carbon emissions, will achieve the Governor's goal to end the use of coal in New York State power plants by 2020.
"While Washington continues an open assault on our environment, New York is leading the charge with bold climate action to protect our future," Governor Cuomo said. "Coal is a relic of the past, and it's time to step up, take action, and put an end to our need for fossil fuels and focus on cleaner, more green energy solutions for the survival of our planet and future generations."
"New York is a leader in the fight against climate change with significant investments to protect our environment," said Lieutenant Governor Kathy Hochul. "We're enhancing our infrastructure across the state and pursuing projects that promote cleaner and greener energy options for our communities and residents."
Coal-Free New York
Delivering on the Governor's 2016 State of the State pledge to go coal-free by 2020 and his 2018 State of the State directive to DEC to develop the rules to fulfill it, the proposed regulations will tighten the state's CO2 Performance Standards for Major Electric Generating Facilities by establishing CO2 emission rate requirements for existing major electric generating facilities. This will ensure the state's remaining coal fired power plants transition to cleaner, alternative sources of energy or shut down by 2020. The state stands ready to help workers and communities transition to a clean energy future through the Governor's Clean Climate Careers initiative and the Electric Generation Facility Cessation Mitigation Fund created to address the needs of the local communities affected by any closures, as well as a host of clean energy programs to support transitioning these plants away from coal.
The proposal appeared in the state register on May 16, and comments will be accepted through July 29, 2018. In addition, three public hearings have been scheduled to provide additional opportunities to comment on the regulations:
July 16, 2018 - 11:00AM
NYSDEC
625 Broadway
Public Assembly Room 129A/B
Albany, NY 12233
July 18, 2018 - 11:00AM
NYSDOT
1 Hunter's Point Plaza
47-40 21st Street
Room 834
Long Island City, NY 11101
July 24, 2018 - 11:00AM
NYSDEC
6274 Avon-Lima Rd. (Rtes. 5 and 20)
Conference Room
Avon, NY 14414-9516
DEC Commissioner Basil Seggos said, "Climate change demands real action, and that is exactly what we are doing here in New York with our new coal regulations. Through these regulations Governor Cuomo is solidifying his role as the nation's leading environmental champion and helping all New Yorkers realize the economic potential of environmental funding and climate action."
Department of Labor Commissioner Roberta Reardon said, "We are very excited to be a part of these efforts to transition workers from the fossil fuel industry and helping to lead creation of the workforce of tomorrow."
New York's Climate Leadership
Today's announcement is another component of the Governor's comprehensive agenda to combat climate change by reducing greenhouse gas emissions and growing the clean energy economy. Through the Governor's leadership, the 2018 Clean Energy Jobs and Climate Agenda is continuing its progress in slashing emissions from existing fossil fuel power plants and advancing clean energy technologies through unprecedented investments in offshore wind, solar, energy storage, and energy efficiency, while spurring market development and creating jobs across the state. The Governor's nation-leading track record of climate accomplishments includes: