Two foundations team up to rid baby of problematic tumor. The Vascular Birthmarks Foundation and the Frank Catalanotto Foundation come together to save babies. 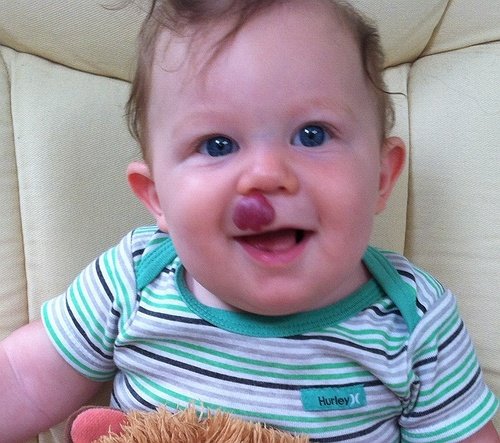 Long Island, NY - May 15, 2015 - Justice Rogers, a two-year old boy from Southern California, was diagnosed with a vascular lesion called an Infantile Hemangioma that began taking over his upper lip. Justice’s mother contacted the Vascular Birthmarks Foundation (VBF) for help because doctors told her to leave it alone. Through the VBF, the mother was networked to a surgeon in California who could remove the tumor, but her HMO insurance would not cover the procedures.

In Long Island, NY, Frank and Barbara Catalanotto run the Frank Catalanotto Foundation which raises money to help the Vascular Birthmarks Foundation. Thirteen years ago, their daughter, like Justice, had an Infantile Hemangioma, and they also found the VBF and the lesion was successfully treated. They agreed to pay for all the expenses for Justice’s surgery. On June 8, 2015, Justice will receive his final treatment to remove the Infantile Hemangioma by Dr. Gregory Levitin, one of the VBF’s experts.  Due to the generosity of the Frank Catalanotto Foundation and the networking of the Vascular Birthmarks Foundation, Justice’s speech and feeding milestones will not be negatively affected by the menacing tumor.

The Catalanottos work with Dr. Linda Rozell-Shannon, President and Founder of the VBF, to select one child each year to receive a free surgery. Frank and Barbara Catalanotto host an annual golf event in their hometown of Long Island every August in order to raise funds for VBF and to fund the surgery for a child. The next Catalanotto Golf Classic is August 3, 2015 at Woodside Acres in Syosset, NY starting with brunch at 10:00AM and ending with dinner buffet at 6:30PM.

Frank Catalanotto is retired from the New York Mets and had a long career in Major League Baseball. His daughter Morgan had a hemangioma on her face that was safely removed due to assistance from the VBF. Today she is a happy, healthy athlete and high school student.

The Vascular Birthmarks Foundation is celebrating 20 years of helping families affected by hemangiomas, port wine stains, vascular malformations, Sturge-Weber Syndrome, Klippel-Trenaunay Syndrome and other vascular birthmarks and tumors. Approximately 1 in 10 babies are born with a vascular birthmark. An estimated 1% of those birthmarks become problematic, even life threatening, and require medical intervention by a specialist.  VBF has networked the treatment of more than 75,000 children and adults with vascular birthmarks and associated conditions.  Click here for more information.

The Frank Catalanotto Foundation was formed in 2000 after Barbara and Frank Catalanotto sought guidance from the Vascular Birthmarks Foundation (VBF) for how to treat their daughter’s hemangioma. The Foundation raises funds to enable VBF to reach more families with the hope, information and networking often needed to successfully diagnosis and treat these vascular anomalies.   Click here for more information.