2014 Film Contest: ‘Because We Can’t Gamble With Our Water Quality 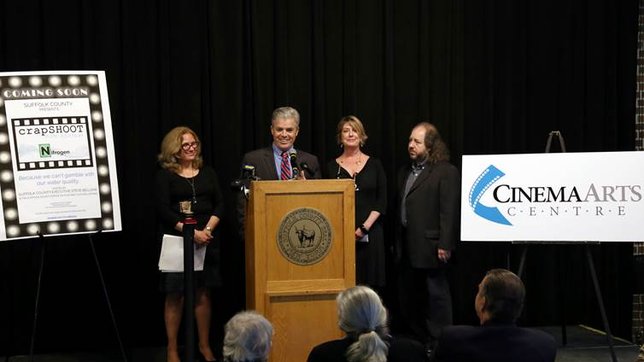 Huntington, NY - May 12, 2014 - County Executive Steve Bellone joined the Suffolk County Office of Film and Cultural Affairs and the United States Environmental Protection Agency (EPA) to unveil the County’s first water quality film contest.  The “crapSHOOT Film Contest” is designed to bring awareness to the effects nitrogen pollution has on bays and river corridors as a result of failing septics, cesspools and fertilizers. The contest is part of the Reclaim Our Water initiative, a comprehensive plan presented by County Executive Steve Bellone to eradicate nitrogen pollution.
“It is so important for us to get the word out about our effort to reclaim our water,” said County Executive Bellone.  “Municipalities must be creative on ways to raise awareness of the environmental challenges we face.  We are confident this film contest will unleash the creativity of our residents on issues related to water quality and nitrogen pollution.”
“I want to commend Suffolk County for its strong commitment to addressing threats and challenges to Long Island’s water,” said Joan Mathews, Director of the Clean Water Division for the EPA.  “We’re thrilled at EPA that Suffolk County has taken a creative approach in raising awareness of this issue.”
The film contest is open to all ages and all residents of New York State.  Entries will be screened at the Huntington Cinema Arts Centre on September 22.   Videos will be judged on creativity and originality, quality, technical accuracy and contest of message.  Complete film contest information, entry details and deadlines are located here.
“We’re really delighted to see Suffolk County using film to convey ideas, to galvanize the community, to make people aware of this important issue,” said Dylan Skolnick, co-director of Huntingon’s Cinema Arts Centre.  “We’re really looking forward to all of the creative ideas that local filmmakers come up with to illuminate this issue.”
“I would like to thank [Suffolk County Executive Steve Bellone] for recognizing the power of film and media to raise awareness about environmental issues,” said Michelle Isabelle-Stark, Director of the Suffolk County Office of Film and Cultural Affairs.  “Film has been known to transform behavior and change lives, so it’s a wonderful vehicle to channel our message about water quality.”
For more Suffolk County news, photos and videos, click here.
Pictured: (L to R) Joan Mathews, Director of Clean Water Division of the Environmental Protection Agency, County Executive Steve Bellone. Michelle Isabelle-Stark, Director of the Suffolk County Office of Film and Cultural Affairs, Dylan Skolnick, Co-Director of the Huntington Cinema Arts Centre