When It Comes To Bullying, Long Beach Teen Teaches Kids to Be “Upstanders, not Bystanders”

15 year-old Sydney Brett is the founder of “Sydney’s Smiles,” a non-profit that equips kids with the tools they need to end bullying in their immediate environment. 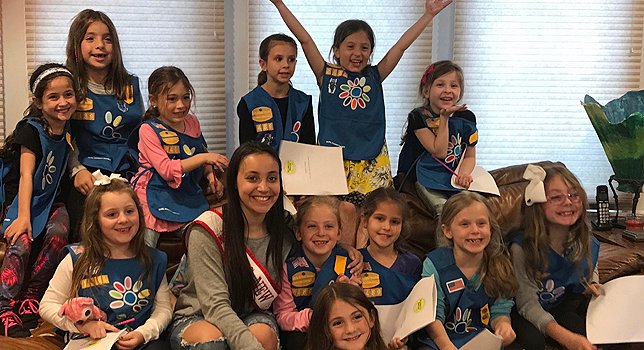 15 year-old Sydney Brett of Long Beach is the founder of “Sydney’s Smiles," a peer-based anti-bullying non-profit.

Over the years, children taking their peers to task for some perceived difference or imagined slight has caused a great deal of harm – often with life-long physical or psychological consequences – but one Long Beach girl is arming bullied kids with the tools they need to fight back against their tormentors and emerge as better, stronger, and more confident young adults.

A 15 year-old sophomore at Long Beach High School, bullying for Sydney Brett started early on in life; as early as first or second grade, she recalled. At an age where most children are struggling with the fear of being different and the quest of finding their own identity, Sydney had an additional barrier to overcome- dyslexia, a disorder that can make learning to read difficult due to how the brain interprets words, letters, or other symbols. 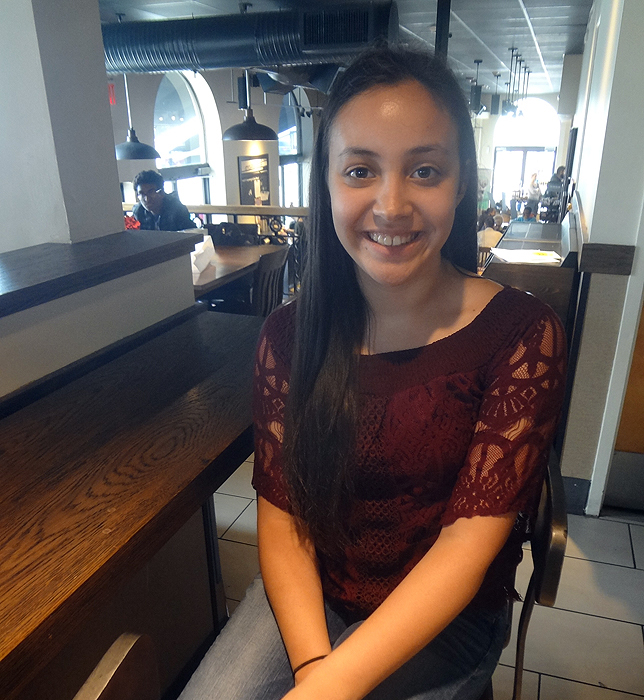 Sydney Brett is arming kids with the tools they need to fight back against bullies and emerge as better, stronger, and more confident. Photo Credit: Chris Boyle

Dyslexia is not a condition that affects general intelligence; the fact that Sydney is currently in the National Honor Society more than attests to that. However, bullies are typically able to pick out even the smallest of things that make one of their peers different from them, and having dyslexia unfortunately put a big red ‘X’ mark on Sydney's back in that regard. And while bullying can be expected in schools from time to time – although certainly not condoned – it wasn't just her fellow students that Sydney said were the culprits, shockingly enough.

“I wasn't just verbally bullied, but I was physically bullied as well...to the point where I had scars on my face. And because I have dyslexia, some of my teachers actually bullied me as well,” she said. “A Special Education teacher that I was working with on math once told me that her dog was smarter than I was. Even though a dog is one of the smartest animals in the world, you shouldn't ever compare a kid to one like that. That's a terrible thing to do.”

Sydney's mother, Jennifer, said that her teacher’s shocking behavior only paved the way to even more bullying from her daughter’s classmates.

“I think because some of the teachers were very open about making fun of her, it became a license for the kids to make fun of her as well because of her learning challenges,” she said. “Instead of her teachers being supportive, they just embarrassed her. The culture at the school at that time was just horrible, and it made us all very sad.”

The abuse from every direction got so bad, Sydney said, that her parents actually pulled her out of public elementary school and put up the money to send her to a private school in Queens, NY. While there, Sydney finally found a nurturing environment; working hard to overcome her dyslexia and discovering her true worth as a human being, she finally developed the confidence to face life on her own terms. Because of this, Sydney bravely requested to go back to the Long Beach School District for her freshman year of high school.

“I had a really good experience at my school in Queens, and they did have a high school program that I could have attended, but I'm someone who is very much into the concept of ‘school spirit’ and that's something that my school didn't have due to its small size,” she said. “I wanted more access to activities and clubs, so I transferred last year to Long Beach High School for my freshman year.”

The transition back to public school went better than Sydney and her parents could have hoped. While she says that there are still some issues with bullying – mostly from a select handful of students she had issues with in elementary school – she's found herself widely accepted overall, and her ability to overcome her dyslexia has resulted in a hard-working resolve that catapulted her grades into the honor roll…and an eventual induction into the National Honor Society. The irony of this distinction, she said, is that due to her dyslexia she literally has to work twice as hard to achieve the same results that other Honor Society members take for granted. 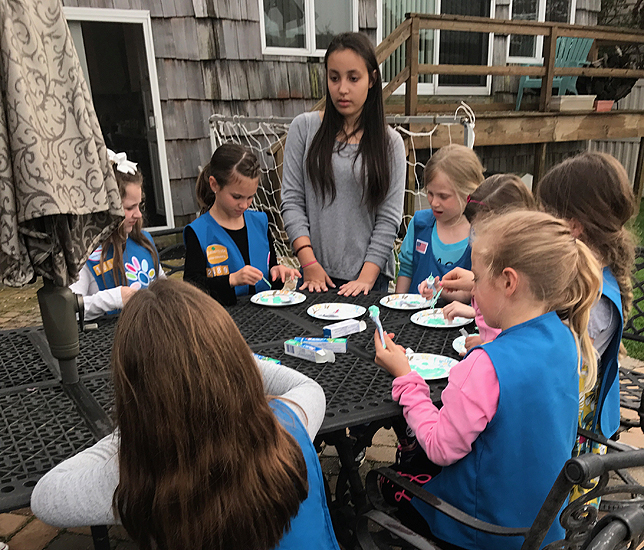 Sydney speaking to local Girl Scouts about how to handle a bully. Photo Credit: Jennifer Brett

An avid proponent of community service – on a typical weekend she may volunteer at the Ronald McDonald House in New Hyde Park, go to a book fair, or participate in any number of other selfless duties - Sydney, who was won the President's Volunteer Service Award three years in a row, decided to use her experiences with bullying to help those going through the same trials and tribulations. It was from there that “Sydney’s Smiles” – a non-profit anti-bullying organization aimed at teaching kids to “be upstanders, not bystanders” – was born.

“I really love the idea of community service, and I loved the idea of creating my own organization, but to be granted non-profit status you have to be very specific about your goals and who you're planning to help,” she said. “I thought at first dyslexia, but that really affects a small portion of society, so then I got the idea about helping kids whose personal experiences with bullying are like mine. I decided that's what my target was going to be.”

Starting an official non-profit organization isn't as easy as you may think; once you've established your goals, there's a lot of paperwork involved, including coining a mission statement, creating a logo, applying for tax-exempt status, and countless other details. But Sydney and her family – along with the help of a community advocate for Long Island teens – approached the endeavor with gusto, and before they knew it the project was up and running at full speed.

Sydney noted that Sydney’s Smiles is a unique organization because of it’s peer-related approach to the bullying problem.

“I don't think there are many organizations like mine, because most anti-bullying programs have adults talking to kids,” she said. “I think my approach is good because when I talk to kids that are my age or younger, they relate to me more.” 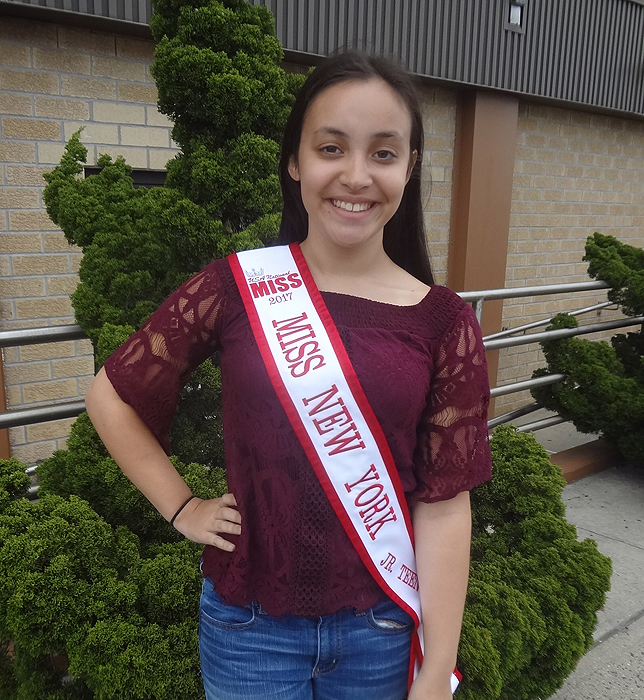 Sydney is the current USA National Junior Teen Miss New York, a fact that most likely has her former bullies quite jealous. Photo Credit: Chris Boyle

Currently, Sydney addresses Girl Scout troops and other small groups of young people, but the plan is to eventually work her way up to speaking engagements at schools in front of entire auditoriums of students. However, as an avid competitive dancer and pageantry participant – she is the current USA National Junior Teen Miss New York, a fact that most likely has her former bullies quite jealous – Sydney has zero qualms about the idea of speaking in front of hundreds of students at a time to get her important message across.

Bullying, Sydney said, has always been around and unfortunately, probably always will. However, there are many things you can do to minimize its effects and, hopefully, vanquish it from your life once and for all.

“I want to teach kids to ‘be upstanders, not bystanders.’ What that means is, if you see someone getting bullied, don't just stand there and do nothing. Get involved, either by helping them or telling an adult,” she said. “I know a lot of kids look down upon snitching, but I know that sticking up for yourself and telling an adult is the most important thing, and it will benefit you so much in the long run. In the end, you have to advocate for yourself.”

Sydney's Smiles is due to hold their first-ever fundraising event on June 4th, 2017- the “Dress 2 Impress” charity fashion show, which will be hosted at the North Shore Towers Apartments in Floral Park. The event will feature refreshments, music, raffle prizes and more, with all proceeds going towards furthering Sydney's Smiles’ outreach to bullied children.

Sydney's mother, Jennifer, said that she's still amazed to this day over the changes she’s seen in her daughter, not to mention her willingness to constantly put aside her own needs – she joked that Sydney practically never sleeps – in a never-ending effort to help others.

“I remember being a sophomore in school, and how your average kid doesn't normally care much about giving back to their community,” she said. “But my daughter has already put in 300 hours of community service in the past year, and the minute she gets back from doing anything, she just wants to sit down and plan the next thing she's going to do. It's amazing.”

Sydney has come a long way from that frightened little girl in elementary school who was incessantly berated by bullies, and even though the divide between what she was and what she's becoming continues to grow ever wider, Sydney said that she feels good that she can use her negative past experiences to assist others who are traveling down the same road of self-discovery that she once started upon herself years ago.

“I'm a lot more confident, I've become a much better speaker, and I know what I stand for and the causes that are really important to me,” she said. “I'm not afraid to speak up for myself, or for others, which I think is really important."