The world-famous GEICO Skytypers will have the “home field” advantage during the 2016 Bethpage Air Show at Jones Beach State Park on May 28-29. 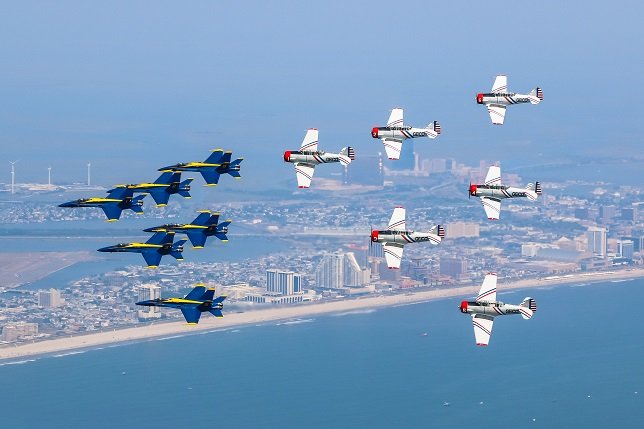 Farmingdale, NY - May 12, 2016 - The world-famous GEICO Skytypers will have the “home field” advantage during the 2016 Bethpage Air Show at Jones Beach State Park on May 28-29.  The Farmingdale-based team’s six vintage SNJ training aircraft will roar over huge air show crowds at Jones Beach in a low-level precision-flying demonstration.  The performance honors service members of the “Greatest Generation,” a fitting way to celebrate Memorial Day weekend.  The routine includes combat tactics and maneuvers that helped control the skies during World War II and the Korean Conflict.

“A majority of our team members earned their wings in the military and we always pay tribute to the brave combat pilots who originally trained in our aircraft as well as those currently serving in the Armed Forces,” says GEICO Skytypers Commanding Officer Larry Arken.  Arken also is the team’s flight leader. “It is a special privilege to fly these vintage WWII trainers on behalf of GEICO.”

The GEICO Skytypers are based in nearby Farmingdale, NY, where the 75-year-old planes are maintained by a full-time staff of expert mechanics who travel with the pilots to every air show.  Most of the pilots live in the area, and both Tom Daly and Jim Record have positions at the Dowling School of Aviation. Daly is the Dean of both Student Affairs and Aviation, and Record is an adjunct professor.

In addition to their air show performances, the SNJs are retrofitted to type giant messages in the sky. Flying wingtip-to-wingtip in a line-abreast formation, the lead plane sends computer signals to each of four other aircraft, synchronizing smoke releases to generate 1,000-foot-tall messages. Each letter is higher than the Empire State Building and can be formed in three to four seconds.

“People on the ground can see our messages from 15 miles away,” says Steve Kapur, the GEICO Skytypers marketing officer. “The messages appear in dot-matrix style, but on a monumental scale and 17 times faster than traditional skywriting.”

The Bethpage Air Show will take place on May 28-29 at Jones Beach State Park.  Performances begin at 10am on Saturday and Sunday with non-stop aerial demonstrations.  In addition to the GEICO Skytypers, the air show will feature performances by the US Navy Blue Angels, the Royal Canadian Air Force Snowbirds, the US Army Golden Knights Parachute Jump Team, Embry Riddle University Pilot Matt Chapman and the Breitling Jet Team.  The air show is free and open to the public.

The Skytypers also are actively involved with children’s charities and youth organizations.  The team conducts presentations at youth centers, schools, hospitals, boys and girls clubs, community groups, ROTC programs, and veterans’ facilities.  The team also hosts some of these events planeside. Organizations interested in partnering with the GEICO Skytypers can request an appearance by emailing the team’s public affairs contact.

For more information on the GEICO Skytypers, visit here.