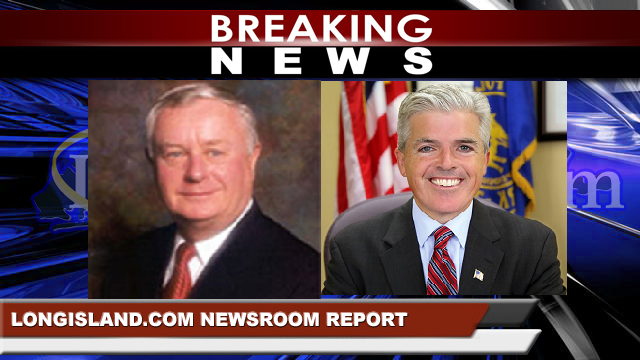 On Tuesday, May 10, Republicans joined Sheriff Vinny DeMarco in calling on the District Attorney to resign. They also called on Bellone to resign as neither District Attorney Spota nor County Executive Bellone have the judgment or integrity to continue to serve Suffolk County. In response to the call on May 10, County Executive Bellone called Republicans “political hacks” who “don’t get it.”

“At a time when we are experiencing an unprecedented addiction crisis, and given the reality that Suffolk County leads the State of New York in heroin overdoses, the thought that the District Attorney may have spared drug dealers in order to protect corrupt politicians is beyond horrifying,” said Suffolk County Legislator Tom Cilmi. “If true, to say this is disgraceful, disgusting, nauseating, would be far too generous.”

Now Bellone, presumably under extreme political pressure, is joining the chorus although has not said anything in the past four years.  After being warned about ex-Chief Burke’s sordid history, Bellone didn’t go to an un-political Police Internal Affairs Bureau, but rather went to a Democratic political colleague, Tom Spota. Bellone trusted Spota.

Now it seems that Spota allowed an elaborate cover-up to take place during his tenure as District Attorney, the likes of which you would expect to see on the big screen. Drug dealers were allegedly let off the hook out of fear they might implicate public officials in other crimes.

“The people of Suffolk County have had enough of the corruption from County Executive Bellone and District Attorney Spota,” said Suffolk County Legislator and Minority Leader Kevin J. McCaffrey. “It is time to restore trust in our government and for Bellone and Spota to step down.”

“The call should not be viewed as political. On the contrary, in light of everything that’s been reported, questions should be asked about the conspicuous absence of our Democratic colleagues,” said Cilmi.