History: Photo of Old Home on the Shinnecock Reservation 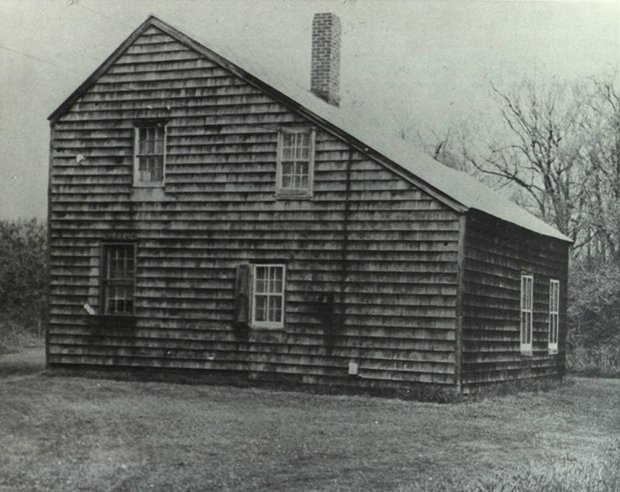 The caption on the back of the photograph reads:

This is the oldest dwelling on the Shinnecock Reservation, near the well known village of Southampton, Long Island. It was probably built around 1850. It has an interesting history and many an old time full blood has gathered in this house to discuss tribal affairs.

It is interesting to know that two ladies, who were sisters, also were raised in this home, Miss Ernestine Walker and her sister Mrs. Edna Eleazar. It is certain that these ladies were full blood Indians, as their father was a Montauk, and their mother a Shinnecock. In 1938, I was hired by these two sisters to come and cut down some tall bushes which had grown up around the front yard.

I had brought my blowgun along with me, and curious, the ladies asked me what it was. I told them that my people, the Catawba, used the blowgun to hunt small game. They both expressed doubt that anything could be killed with such a weapon. Sighting a bird in a tree, I asked the ladies to watch, and I quickly shot the bird down much to their amazement. David Walker, the father of the two sisters, was one of the ten Indians lost in the wreck of the Circassion in 1876.

The creator of this photo was Red Thunder Cloud, also known as Carlos Westez or Cromwell Ashbie Hawkins West. Researchers should be aware that there is some controversy regarding Red Thunder Cloud's claims of Catawba heritage.