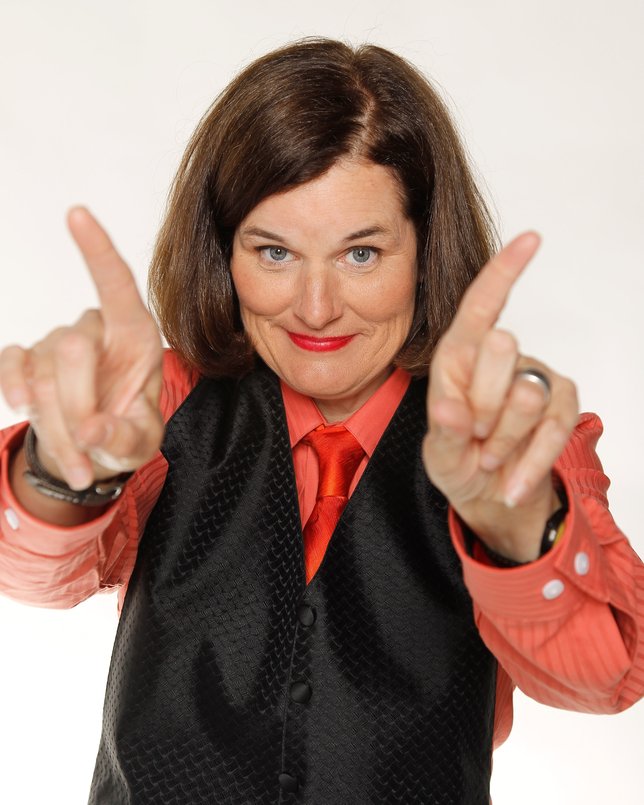 Sag Harbor, NY - May 10, 2014 - Bay Street Theater is pleased to announce three upcoming special Saturday nights beginning Memorial Weekend on May 24 with Paula Poundstone. Richard Lewis will be on stage June 2l and audiences can spend “A Divine Evening with Charles Busch,” accompanied by Tom Judson on July 26. All shows start at 8 pm. These special evenings include VIP ticket opportunity to mix and mingle with the artist at a cocktail  party either before or following the performance, depending upon the night. Tickets are available on line at baystreet.org or by calling the Bay Street Theater Box Office at 631-725-9500.
You can hear Paula Poundstone as a regular panelist on NPR’s popular rascal of a weekly news quiz show, Wait Wait… Don’t Tell Me.  She tours regularly, performing standup comedy across the country, causing Bob Zany with the Boston Globe to write: “Poundstone can regale an audience for several hours with her distinctive brand of wry, intelligent and witty comedy.”
Poundstone is known for her ability to be spontaneous with a crowd.  Poundstone says: “No two shows I do are the same. It's not that I don't repeat material. I do. My shows, when they're good, and I like to think they often are, are like a cocktail party. When you first get there, you talk about how badly you got lost and how hard it was to find parking. Then you tell a story about your kids or what you just saw on the news. You meet some new people and ask them about themselves.  Then, someone says, "Tell that story you used to tell," and then someone on the other side of the room spills a drink, and you mock them.  No one ever applauds me when I leave a party, though. I think they high five.”
Poundstone’s newest comedy CD, I HEART JOKES: Paula Tells Them in Boston was recorded during a performance at the Wilbur Theatre in the heart of the city and was released on April fool’s Day 2013.
Last year, she joined Whoopi Goldberg, Joan Rivers and several other prominent women in comedy for a feature-length documentary produced by Lions Gate for Showtime entitled, WHY WE LAUGH TOO: Women of Comedy. Paula has starred in comedy specials on HBO and BRAVO, won an Emmy Award, served as "official correspondent" for The Tonight Show during the 1992 Presidential race, pioneered the art of backstage commentary during an Emmy telecast, steps up to the plate for causes she believes in, and is almost always included in any compendium – be it film, television or print, noting comedic influences of the 20th/21st century, most recently, We Killed: The Rise of Women in American Comedy (October 2012, Sarah Crichton Books). Paula also appears on "Late Night w/ Craig Ferguson" about 3 times a year and she'll do an occasional editorial for NPR's "All Things Considered".
Poundstone is also a published author and lecturer.  Her hard cover book, There is Nothing In This Book That I Meant To Say (Crown, 2006, with a forward by Mary Tyler Moore) is still in release on audio (Highbridge) and in paperback.  Other writing credits include the back page columnist of Mother Jones, The Los Angeles Times, Entertainment Weekly, and Glamour magazine.
Richard Lewis has taken his lifelong therapy fodder and carved it into a commanding, compelling art form. His early career as a stand-up brought him to the top of his ranks. Over time and through a variety of mediums, he broadened his exposure and more and more came on board to appreciate his brilliantly warped world. Comedy Central has recognized Lewis as one of the top 50 stand-up comedians of all time and he was charted on  the GQ Magazine list of the '20th Century's Most Influential Humorists'.
Lewis loved being part of HBO’s Curb Your Enthusiasm, where he was nominated for a SAG award for his work in the ensemble category for his recurring guest star role, playing true-to-life as one of Larry David's closest friends in "CYE.”  Other television includes: HBO’s I'm Exhausted, earning Richard an ACE nomination for Best Stand-Up Comedy Special and I'm Doomed, his second for HBO, also earned an Ace nomination. His cable-special debut, I'm In Pain, aired on Showtime.
Lewis just completed filming Squirrels To The Nuts, a Peter Bogdanovich film due for release in 2014, starring Jennifer Aniston, Owen Wilson, Imogen Poots and Cybill Shepherd, among others. His first defining film role was his appearance in Leaving Las Vegas. He also was in Drunks, and starred in the y beloved Robin Hood Men In Tights.
CHARLES BUSCH is the author and star of such plays as The Divine Sister, Vampire Lesbians of Sodom, and The Tale of the Allergist’s Wife, which ran for nearly two years on Broadway and received a Tony nomination for Best Play. He has starred in three shows including Auntie Mame and his own plays Shanghai Moon and The Lady In Question. He wrote and starred in the film versions of his plays, Psycho Beach Party and Die Mommie Die, the latter of which won him the Best Performance Award at the Sundance Film Festival. In 2003, Mr. Busch received a special Drama Desk Award for career achievement as both performer and playwright.
Charles is also the subject of the acclaimed documentary film The Lady in Question is Charles Busch. He is a two-time MAC award winner and has performed his cabaret act in many cities including San Francisco, Provincetown, New Orleans, Atlanta, Philadelphia and in New York at the Ballroom, Birdland and 54 Below.                                   .
Bay Street Theater is a year-round, not-for-profit professional theater and community cultural center which endeavors to innovate, educate, and entertain a diverse community through the practice of the performing arts. We serve as a social and cultural gathering place, an educational resource, and a home for a community of artists.