Memorial Day Weekend with Paula Poundstone at Bay Street Theater on Saturday, May 23

Bay Street Theater is pleased to announce MEMORIAL DAY WEEKEND with PAULA POUNDSTONE, May 23 at 8 pm. 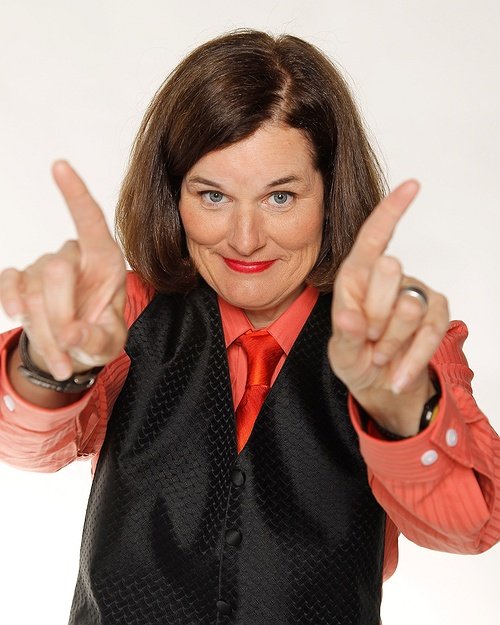 Sag Harbor, NY - May 10, 2015 - Bay Street Theater is pleased to announce MEMORIAL DAY WEEKEND with PAULA POUNDSTONE, May 23 at 8 pm. To purchase tickets, click here or call the Box Office at 631-725-9500 Tuesday – Saturday 11 am – 5 pm. The Box Office will be open 7 days a week beginning Memorial Day weekend. This special evening includes VIP ticket opportunity to mix and mingle with the artist at a cocktail party following the performance. Beach Magazine is the media sponsor for the 2015 Summer Comedy Club.

Thirty two years ago Paula Poundstone climbed on a Greyhound bus and traveled across the country -- stopping in at open mic nights at comedy clubs as she went. A high school drop-out, she went on to become one of the great humorists of our time. You can hear her through your laughter as a regular panelist on NPR’s popular rascal of a weekly news quiz show, Wait Wait… Don’t Tell Me.  She tours regularly, performing standup comedy across the country, causing Bob Zany with the Boston Globe to write: “Poundstone can regale an audience for several hours with her distinctive brand of wry, intelligent and witty comedy.”  Audience members may put it a little less elegantly:  “I peed my pants.”

While there is no doubt that Poundstone is funny, the thing that probably separates her from the pack of comics working today and that has made her a legend among comics and audiences alike is her ability to be spontaneous with a crowd.  Poundstone says:  “No two shows I do are the same. It's not that I don't repeat material. I do. My shows, when they're good, and I like to think they often are, are like a cocktail party. When you first get there, you talk about how badly you got lost and how hard it was to find parking. Then you tell a story about your kids or what you just saw on the news. You meet some new people and ask them about themselves.  Then, someone says, "Tell that story you used to tell," and then someone on the other side of the room spills a drink, and you mock them.  No one ever applauds me when I leave a party, though. I think they high five.”

Paula's interchanges with the audience are never mean or done at a person’s expense. She even manages to handle politics without provoking the pall of disapproval less artful comics have received.

Over the span of her career, Paula has amassed a list of awards and accolades that stretch the length of a great big tall guy’s arm. She not only shot through the glass ceiling, she never even acknowledged that it was there.  Never one to stereotype herself as a ‘female comedian’ or limit herself to comedy from a ‘female’ point of view, in the early 90’s she was the first woman to win the cable ACE for Best Standup Comedy Special and the first woman to perform standup at the prestigious White House Correspondents dinner where she joined the current President as part of the evening’s entertainment.

In November, 2012 in Washington DC, Paula was honored, along with Nina Totenberg, NPR correspondent; David Brooks, New York Times columnist; and Bob Mankoff, New Yorker Cartoon Editor, with the 2012 Moment   Magazine Creativity Award at their 35th anniversary symposium and dinner, followed by a one-hour panel on the intersection of humor and politics. Just weeks later Paula was hand-picked to interview Calvin Trillin for the Los Angeles-series-darling, Writers Bloc, a series that presents conversations between the featured author and another interesting thinker.

Paula has starred in comedy specials on HBO and BRAVO, won an Emmy Award, served as "official correspondent" for The Tonight Show during the 1992 Presidential race, pioneered the art of backstage commentary during an Emmy telecast, steps up to the plate for causes she believes in, and is almost always included in any compendium – be it film, television or print, noting comedic influences of the 20th/21st century, most recently, We Killed: The Rise of Women in American Comedy (October 2012, Sarah Crichton Books). Paula also appears on "Late Night w/Craig Ferguson" about 3 times a year and she'll do an occasional editorial for NPR's "All Things Considered".

In April 2013 NPR Laughter Therapy (Highbridge Audio) released a 2-CD collection of NPR’s best interviews and stories with “funny folks” including Paula’s Talk of the Nation interview.  If it means anything to anyone, she is recognized as one of Comedy Central's 100 greatest stand-ups of all time.  Paula won an American Comedy Award for Best Female Standup Comic, and in 2010 she was one of a select group voted into the Comedy Hall of Fame.

Wait Wait…Don’t Tell Me is now heard in 5 million homes across the country, including all of the major markets, internationally on NPR Worldwide and on the Internet via podcast.  In 2008 it received a Peabody Award for broadcasting excellence.  On the show Paula gets to match wits with some of the country’s leading pundits.  In May 2013 the show filmed its first Cinecast from New York's Town Hall and Paula was one of the Panelists.  The show made its television debut on BBC America with a “2011 Year In Review.”  Paula was on that panel as well.  Poundstone quickly goes on record about how much she loves being part of the show saying: “I am a proud member of the endorphin production industry.  They allow me to say whatever I want on Wait, Wait Don't Tell Me.  The panelists are unscripted, so it's perfect for me. I feel like I'm a batter in a batting cage. I get lobbed topics. Sometimes I just watch them go by, but every now and then I get a piece of one. If the others didn't cheat, it would be an almost perfect work experience.”

Paula is also a published author and lecturer.  Her hard cover book, There is Nothing In This Book That I Meant To Say (Crown, 2006, with a forward by Mary Tyler Moore) is still in release on audio (Highbridge) and in paperback.  Other writing credits include the back page columnist of Mother Jones, The Los Angeles Times, Entertainment Weekly, and Glamour magazine.

Not only a writer, but an avid reader, Paula continues her role for the American Library Association (ALA) as the Nat'l spokesperson for United for Libraries, their "Friends of Libraries" national network – a citizens support group who work to raise awareness and much needed funds to support their local libraries.  Paula has appeared as the headliner at the ALA's annual conference for their Laughs On Us panel the last four years, and to quote Sally Reed, the ALA Nat'l Director:  "...you'd have to come to one of these events to see how adored Paula is by librarians.  We love her and it's never repetitive."   Paula has hosted many events to great success, including the Art Directors Guild Awards an unprecedented 4 times.

To purchase tickets, log on to www.baystreet.org or call the Box Office at 631-725-9500. For more information about Bay Street Theater click here. This special evening includes VIP ticket opportunity to mix and mingle with the artist at a cocktail party following the performance