Governor Andrew M. Cuomo today brought the Enough is Enough campaign to Syracuse University to announce that a number of private colleges and universities from across the state are joining the initiative. 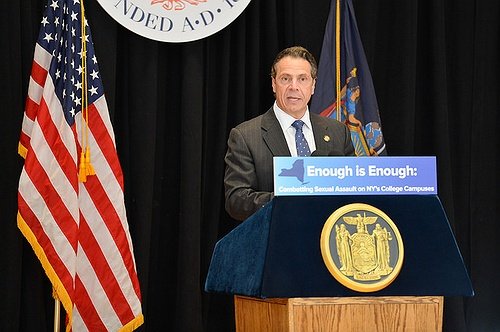 Albany, NY - May 6, 2015 - Governor Andrew M. Cuomo today brought the Enough is Enough campaign to Syracuse University to announce that a number of private colleges and universities from across the state are joining the initiative. The wide-ranging, statewide campaign is pushing for passage of the Governor’s legislation combatting sexual assault on college and university campuses. The private schools joining the campaign today are the first in the state to support the Governor’s policy, which would require all colleges and universities in New York to implement uniform sexual assault prevention and response protocols, previously adopted by the State University of New York. By supporting stronger measures, these schools are taking a stand on behalf of students in the fight against on-campus sexual assault. The Governor was joined by Syracuse University Chancellor Kent Syverud and a Syracuse University student survivor to make today’s announcement.

“These private colleges are joining our growing coalition, and together we are taking a stand to say enough is enough: we must do more to fight sexual assault on college campuses,” Governor Cuomo said. “While this issue did not originate here in New York, we have the opportunity and the obligation to find a solution. We must continue to urge the Legislature to pass this law and let the students of New York State know that we respect them and their potential and will not let violence go unnoticed or unpunished. We have the power to change the conversation around sexual assault on campus – and if we change it here, the Empire State will be a leader in combating this epidemic across the nation.”

In addition to Syracuse University, the private colleges joining the campaign today are:

Once law, the Governor’s policy will solidify New York’s role as a national leader in the fight against on-campus sexual violence and better protect the state's 1.2 million college students.

In January, Governor Cuomo announced legislation codifying his sexual assault prevention and response policy – adopted by SUNY at his direction last year – and applying its provisions to all colleges and universities, public and private, in New York State. By extending the SUNY policy to all colleges, New York’s students will be better protected with comprehensive, uniform procedures and guidelines, including affirmative consent and access to law enforcement.

Governor Cuomo launched the Enough is Enough campaign in February, and it has since gained a wide range of support from a variety of public officials, organizations and community groups, including:

To promote the campaign and the importance of passing the Governor’s proposal this year, Lieutenant Governor Kathy Hochul has toured the state to bring “Enough is Enough” to college campuses across New York. That tour is ongoing as she continues to meet with members of the student body, faculty and administration as well as service providers and advocates for survivors of rape and sexual assault.

As part of the campaign, the New York State Police created a hotline dedicated to responding to reports of sexual violence on college and university campuses. The hotline is operated by specially-trained members of the State Police who are on-call 24 hours a day to respond to sexual assault calls throughout the state.

The campaign also includes a website and a video featuring students, advocates and elected officials advocating for the passage of the Governor’s legislation.

• A statewide definition of affirmative consent, defining consent as a clear, unambiguous, and voluntary agreement between the participants to engage in specific sexual activity;
• A statewide amnesty policy, to ensure that students reporting incidents of sexual assault or other sexual violence are granted immunity for certain campus policy violations, such as drug and alcohol use;
• A Sexual Violence Victim/Survivor Bill of Rights, which campuses will be required to distribute to all students in order to specifically inform sexual violence victims of their legal rights and how they may access appropriate resources. The Bill of Rights clearly states that students are given the right to know they can report sexual assaults to outside law enforcement, including the State Police;
• Comprehensive training requirements for administrators, staff, and students, including at new student orientations.