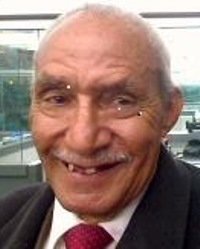 Jamaica, NY - May 6th, 2015 - At the request of the Port Authority NY-NJ Police Department, a New York State Missing Vulnerable Adult Alert has been issued relating to the disappearance of Charles Delgado; age 78; from Jamaica, NY on May 6th, 2015.

Charles Delgado is a 78-year-old missing vulnerable adult with dementia. He was last seen at 6:40 AM on May 6 in Terminal 4 at JFK Airport. Charles was wearing a black suit, white shirt, red tie and fedora hat. He missed his connecting flight to Chicago. Charles may appear confused and be in need of medical attention.

Charles is described as a 78 year old African American man, and is 5'07", weighing 140 pounds with gray hair and brown eyes.

Anyone with any information about Charles' whereabouts is urged to call the NY NJ Port Authority Police Department's 1st Precinct at 718-244-4366, or call 911.