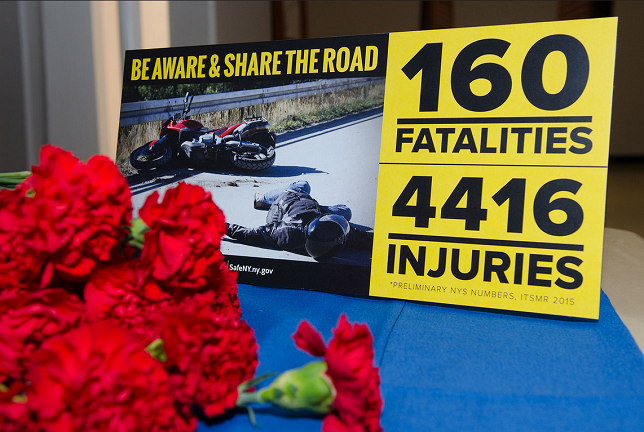 Albany, NY - May 5, 2016 - The New York State Governor's Traffic Safety Committee (GTSC) today announced that the state held its first-ever motorcycle safety fair at Albany's Empire State Plaza Concourse, which included hands-on exhibits, demonstrations, and information to keep motorcyclists and the motorists with whom they share the road safe during riding season and beyond. The fair was held in conjunction with Motorcycle Safety and Awareness Month, when states across the nation raise awareness among all motorists about the importance of sharing the road.

"With breathtaking views from one end of the state to the other, New York is one of the best destinations for motorcycle riding anywhere in the country. But we must work together to ensure it is the safest as well," said GTSC Acting Chair and Department of Motor Vehicles (DMV) Executive Deputy Commissioner Terri Egan. "I thank our partners who worked to put on this informational safety fair and those who work tirelessly each day to keep New Yorkers safe on our roadways."

The fair, held on May 5, included exhibits, demonstrations, and information for motorists to learn more about and stay aware of motorcyclists as the weather warms up, and for motorcyclists to ensure they are always riding as safely as possible. Features included:

"Every year, thousands of motorcyclists are rushed to New York's hospitals with broken bones, collapsed lungs, concussions, and other life-threatening injuries," New York State Commissioner of Health Dr. Howard Zucker said. "While prompt medical attention enables some riders to make a full recovery, others are not as fortunate. Motorcyclists are much more likely than car passengers to die in a traffic crash. That's why it's so critically important for riders to wear an approved helmet, and for all of us to watch for motorcycles and share the road."

In May 2015, DMV and GTSC announced that 70 percent of motorcycle permit holders in New York State elected to take motorcycle safety courses in 2014, up from 51 percent in 2010. Completion of these intensive safety courses, which are offered by the MSF under an agreement with the DMV, give riders the opportunity to receive hands-on training and enables motorcycle permit holders to waive the basic road test required by the DMV for licensure.

"Through the New York State Motorcycle Safety Program, the Motorcycle Safety Foundation offers training courses to match a variety of skill levels and rider experience," said MSF Program Manager Ben Zadrozny. "Whether you are new to motorcycling or have been riding for years, training is an essential part of being safe on the road. The best place for a new rider to start once they've made the decision to ride is by completing a MSF Basic RiderCourse."

Motorcyclists are more vulnerable to injury and even death than other motorists because they lack the protection of a vehicle around them. In addition to visually checking mirrors and blind spots for motorcyclists before switching lanes and at intersections, motorists sharing the road with motorcycles should remember never try to share a lane with motorcyclists and allow them a full lane width. As always, motorists should also use signals, never tailgate or drive while distracted, and allow more following distance around motorcyclists.

New York State Police Superintendent Joseph A. D'Amico said, "The State Police continue our commitment to making roads safer for all operators, including motorcyclists, through education and active enforcement. As the weather gets warmer, drivers should keep an eye out for motorcycles, making sure to take a second look before changing lanes or pulling out into traffic. We also want to remind motorcycle operators to use proper safety equipment and designated lanes. We can all work to make our roads safer by obeying traffic laws and choosing not to drive distracted or impaired."

Across the country, the National Highway Traffic Safety Administration (NHTSA) reports that nearly 4,600 motorcyclists were killed in traffic crashes, and 88,000 were injured. Additionally, according to NHTSA: