Second RFP to be Issued by the Landbank to Return Blighted Properties into Tax-Paying Parcels. 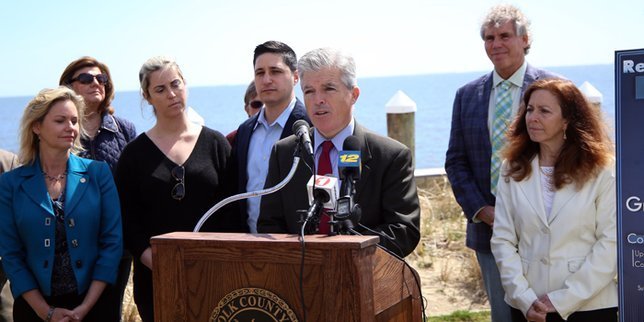 Suffolk County, NY - May 4, 2017 - Suffolk County Executive Steve Bellone today announced that the Suffolk County Landbank has issued a request for proposal (RFP) to revitalize nine blighted, environmentally distressed sites in the Towns of Babylon, Brookhaven and Islip that have been tax-delinquent for an average of 16 years. This is the second time the Landbank has issued a series of RFPs with the intention of placing blighted properties back on the tax roll to improve the region’s economy and facilitate the clean-up of potentially environmentally challenged sites. Proposals are due on June 12, 2017.
“We will use every tool in our arsenal to revitalize these neglected properties into tax-paying entities and transform each community,” said County Executive Bellone.  “I encourage anyone interested to submit their proposal to the Suffolk County Landbank as we continue to make progress is restoring promise to these locations."
The nine sites on average have been tax delinquent for approximately 16 years and cumulatively owe nearly $11 million in delinquent taxes. Once back on the tax rolls, the properties would pay back a cumulative property tax of more than $500,000.
The sites, which include former commercial, light industrial, automotive and residential uses, include:
The Suffolk County Landbank issued its first RFP to revitalize blighted properties in 2016, and closed on two of those properties resulting in approximately $180,000 in taxes that would not have been collected otherwise. The second RFP, similar to the first, provides a tax deed to buyers, free of back taxes as well as past New York State clean-up costs, if applicable.
Since its inception, the Suffolk County Landbank has recouped more than $5 million in unpaid property taxes from more than 90 property owners.
Prior to the creation of the Suffolk County Landbank in 2013, the County had no way of collecting delinquent taxes on these types of properties without exposing the County to the liability associated with the contamination of the site. Today, the County can transfer the liens to the Landbank, which can then sell the lien at a marketable value to a fully vetted developer or buyer. In turn, the developer or buyer would remediate the contamination and revitalize the property in alignment with the local community’s plans.
To access the Suffolk County Landbank Request for Proposals please visit: http://suffolkcountylandbank.org/2017RFP.
All proposals are due by Monday, June 12 and should be delivered to:
Suffolk County Landbank Corp.
H. Lee Dennison Building,
100 Veterans Memorial Highway
2nd Floor
PO Box 6100
Hauppauge, NY 11788
Attn:  Andre Bermudez