USA Luge announced its national team on Monday that will participate in the 2016-2017 World Cup and World Championship season, as the run-up to the 2018 Olympic Winter Games in Pyeongchang draws one year closer. 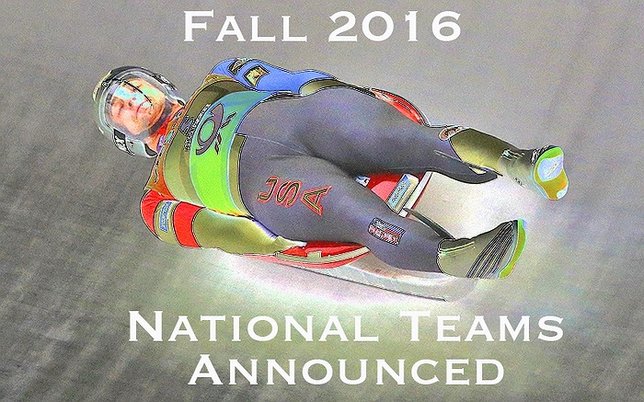 All members of last year's record-setting squad set to return.

Lake Placid, NY - May 2, 2016 - USA Luge announced its national team on Monday that will participate in the 2016-2017 World Cup and World Championship season, as the run-up to the 2018 Olympic Winter Games in Pyeongchang draws one year closer.

The squad that captured a USA Luge-record 18 World Cup medals last winter, will be led by members of the national A team.

The group is led by Erin Hamlin, 2014 Olympic bronze medalist and 2009 World Champion; Chris Mazdzer, the third-ranked man in the final 2015-2016 World Cup standings; Summer Britcher, who tied for the most tour victories last season with three; the rising Tucker West, who collected two World Cup medals and was the U23 World Champion; and Emily Sweeney, a World Cup silver medalist.

Hamlin, a three-time Olympian from Remsen, N.Y., had one gold medal and three silvers in the first half the World Cup season to propel her to fourth place in the overall standings.

A two-time Olympian, Mazdzer, of Saranac Lake, N.Y., had five podium results, including a pair of World Cup victories on his way to a career-best third place in the overall rankings. Mazdzer recently received his Bachelor’s degree from DeVry University and underwent successful shoulder surgery in early April.

West, of Ridgefield, Conn., is now attending spring classes at Union College in Schenectady, N.Y. Prior to his enrollment, however, the 2014 Olympian won the U23 world title and scored World Cup silver and bronze medals to place seventh on the campaign.

Sweeney, of Suffield, Conn., was a consistent top 10 competitor, topped by a World Cup career best silver medal in Lake Placid. The 2013 Junior World Champion shared the podium with Hamlin and Britcher as the American women swept the podium for the first time in the organization’s history.

These national A team members will be joined by the national B team, including the doubles team of Matt Mortensen, of Huntington Station, N.Y. and Jayson Terdiman, of Berwick, Pa.

In just their second year together, Mortensen and Terdiman worked their way up to fifth place last year in the World Cup standings. The Sochi Olympic team members, with different partners in 2014, had four top six finishes, highlighted by a fourth place effort in January.

Teammates and the doubles team of Justin Krewson, of Eastport, N.Y. and Andrew Sherk, of Fort Washington, Pa., have also been named to the national B team. In their debut season, Krewson and Sherk anchored USA Luge to a gold medal in the Lake Placid team relay. Their season was cut short when Krewson suffered a leg injury.

Other B team athletes include Raychel Germaine, of Roswell, Ga. As a graduating junior last season, Germaine qualified for the World Cup squad in the fall, and scored a World Cup seventh place in Lake Placid. She, too, underwent successful shoulder surgery immediately after the season.

Sochi Olympian Aidan Kelly, of West Islip, N.Y., as well as Taylor Morris, of South Jordan, Utah, round out the national B team. Kelly was eighth in the Lake Placid World Cup last December, while Morris took 11th place.

Graduating junior Riley Stohr, of Whitehall, Mich., has B team status. Stohr has one top 15 World Cup result and has battled shoulder problems the past two years.

The national C team is comprised of 2010 Olympian Julia Clukey, of Augusta, Maine, and the doubles unit of Jake Hyrns, of Muskegon, Mich. and Anthony Espinoza, of Park City, Utah.

Clukey has a World Cup silver medal to her credit in February 2013 (and another silver in the team relay), and completed her degree from DeVry University earlier this year.

Hyrns and Espinoza will enter their second season together this fall. They left the World Cup tour in mid-season last year, returning home for more abundant training on home ice.

Although the 2016-2017 schedule has not been finalized, the season will be highlighted by the World Championships in Igls, Austria. Also, sleds are anticipated to hit the ice on the new 2018 Olympic track in South Korea.