The funds were awarded through the U.S. Department of Housing and Urban Development. 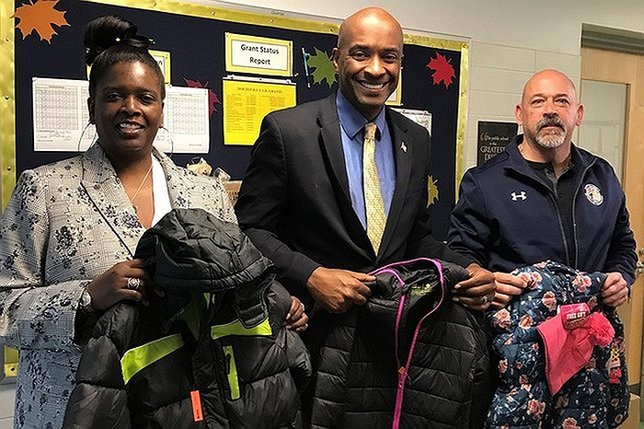 Photo by: Office of Legislator Abrahams

A $1 million Community Development Block Grant has officially been allocated toward the widescale reconfiguration and renovation of Roosevelt’s Centennial Park, Nassau County Legislator Kevan M. Abrahams (D - Freeport) has announced.
Legislators voted unanimously on Monday, April 26 to apply the funds, which were awarded through the U.S. Department of Housing and Urban Development, toward this capital project. Upon its completion, Centennial Park will feature a miniature turf soccer pitch field; resurfaced and renovated basketball, (3) tennis and handball courts; a rebuilt playground with age-specific play areas; an exercise path with outdoor exercise equipment; and a state-of-the-art splash pad spray park suitable for toddlers, families and teens. Other improvements include new fencing, seating and tables, plantings, energy-efficient lighting and more throughout the park.
The grant elevates the County’s investment in Centennial Park to a total of $7 million.
“The Legislature has secured the final puzzle pieces needed to deliver Roosevelt residents the Centennial Park they deserve and have asked for,” Legislator Abrahams said. “I thank my colleagues for hearing the voices of the community and supporting an investment that will reap dividends for our families and children for years to come.
Work for the Centennial Park project has been put out for bids and a Notice to Proceed with the project could possibly be issued by this fall, County officials said.