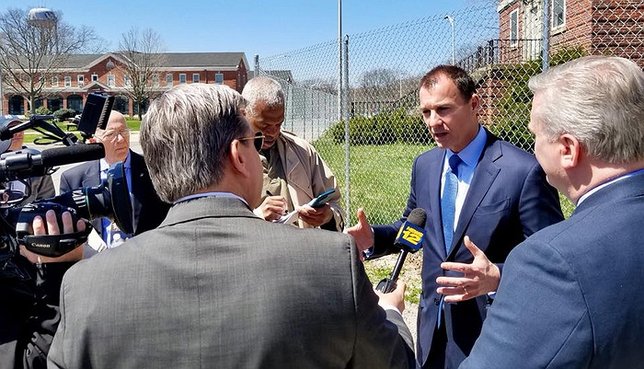 Congressman Tom Suozzi speaking to reporters outside of the Northport VA.

Huntington, NY - May 1, 2018 - On Monday, Congressman Tom Suozzi (D – Long Island, Queens) met with the Director of the Northport VA, Scott Guermonprez, to tour the facility and discuss plans to address infrastructure and staffing concerns.
“I’ve found in my experience that the veterans community supports this VA, but there has been a steady drumbeat of negativity over the past few years that has started to wear away at the VA’s positive reputation. We need to get that reputation back, and I think that under this new leadership, along with some pushing from the outside, that we will get this place back and make it great once again,” said Suozzi.
First up on the Northport VA’s three-year plan is the hiring of 62 additional engineers and custodial workers, which will facilitate the demolition of two long-abandoned and crumbling buildings, one of which housed the facility’s original hospital. The Veterans Administration has plans to demolish and/or repurpose 428 abandoned buildings nationwide. “Demolition is set to begin in November and we want these two buildings first on the list,” said Suozzi standing outside the fenced-off buildings.
The average age of a VA facility nationwide is 53 years; the Northport facility is over 90 years old. “We need to turn the page towards the future,” said Guermonprez, who took over the reins of the 300-acre medical compound in June 2017.
“While this VA has plenty of work ahead of them, I am confident that they have a plan and are moving in the right direction to ultimately upgrade and restore these facilities so that they can properly serve and honor our veterans here, and in the community,” said Suozzi.