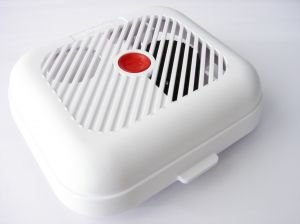 Nassau County, NY - April 30, 2014 - In light of the recent tragedy at Legal Sea Foods in Huntington, Nassau County Executive Edward P. Mangano, Presiding Officer Norma Gonsalves and Legislator Judy Jacobs announced the approval of a new life-saving law that requires carbon monoxide detectors in all new and existing commercial buildings within Nassau County. Statistics from the Centers for Disease Control and Prevention (CDC) indicate that nearly 400 Americans die from unintentional carbon monoxide poisoning each year.
“Nassau County is taking an important step forward in protecting the health and welfare of our residents by requiring all commercial buildings to have carbon monoxide detectors in place,” said County Executive Mangano. “Carbon monoxide poisoning is an important public health problem and we will do all we can to prevent such senseless deaths here in Nassau County.”
Nassau County’s Fire Prevention Ordinance now contains the most comprehensive and complete carbon monoxide detection law in the United States, as it pertains to explaining and instructing business owners and alarm installers how to install and maintain these lifesaving devices to protect all residents who live, work, and play throughout the county.
Presiding Officer Norma Gonsalves stated, “I am very glad that we have found a way to address this concern at the County level. Carbon monoxide is a silent and dangerous killer, and I hope the state follows Nassau’s lead by implementing this legislation state-wide.”
Legislator Judy Jacobs stated, “I am very pleased that the County Executive and I agreed that it was important for the County to adopt a carbon monoxide law. It is especially reassuring that the Fire Marshal's office, at the County Executive's behest, filed an amendment to the Fire Code which covers all commercial buildings, education and County buildings, also. Obviously, a State law is so important since the tragedy which happened a couple of months ago. But, until they pass one, it is urgent that we protect the health, safety and welfare of our residents.”
Since carbon monoxide is a product of combustion from fuel-burning appliances utilized for heating and cooking, it is crucial for all commercial occupancies to have carbon monoxide safety devices. Carbon monoxide is odorless and colorless and can be deadly within minutes, which is why carbon monoxide detectors are the sole protector against this silent killer.