National Grid partnered with the Town of Huntington for Earth Day to transform the Gateway Community Garden in Huntington Station. 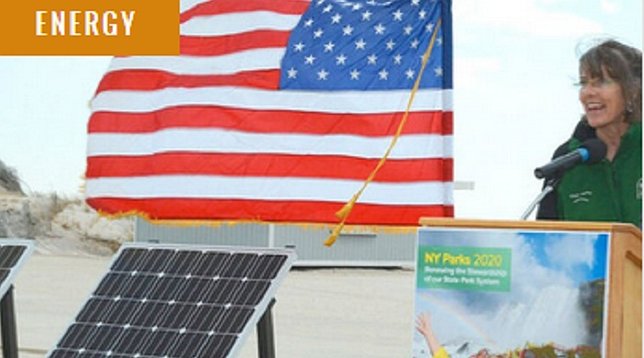 Over 75 National Grid volunteers installed a drainage system, building a bio swale, and planted flowers in celebration of Earth Day at the Gateway Community Garden in Huntington Station.

"Every day is Earth Day at National Grid and we always try to leave things better than how we found them,” said Ken Daly, President, National Grid, and New York. “But today is very special we are leaving the Gateway Community Garden better, cleaner, and greener for many years to come."

The Gateway Community Garden is a highly visible one-acre property in Huntington Station that was revitalized. The Town of Huntington purchased the property and converted it into a community garden success that utilizes the property to grow food and donates it to food banks.

Flooding was an issue at the community garden; National Grid working with the Town of Huntington developed a plan to install drainage to capture the runoff to prevent flooding of the raised planting beds. National Grid volunteers hand dug a 400 feet trench to install an underground drainage system and built a rock swale capturing runoff that flows into the newly planted rain garden. The new drainage was then buried and pea gravel was poured over the drainage creating clean clear walkways between the raised planting beds.

“I want to thank Ken Daly and the National Grid team of volunteers for their Earth Day efforts at Gateway Community Garden, including the new drainage system and the rain garden that will make the garden more environmentally efficient and enjoyable for the many gardeners and children who attend the educational programs there. Your work here demonstrates National Grid’s level of commitment to its customers and the community it serves,” said Huntington Supervisor Frank P. Petrone.

A rain garden was built to provide environmental benefits as it captures and cleans rain water before it enters the groundwater system. Volunteers planted colorful moisture tolerant flora and they also removed litter and weeded the one-acre garden.

Every year National Grid chooses an Earth Day project across Long Island where they can make an impact. National Grid volunteered at Earth Day events across New York State including, Brightwaters and Staten Island.

About National Grid
National Grid (LSE: NG; NYSE: NGG) is an electricity and natural gas delivery company that connects nearly 7 million customers to vital energy sources through its networks in New York, Massachusetts and Rhode Island. It is the largest distributor of natural gas in the Northeast. National Grid also operates the systems that deliver gas and electricity across Great Britain.

Through its U.S. Connect21 strategy, National Grid is transforming its electricity and natural gas networks to support the 21st century digital economy with smarter, cleaner, and more resilient energy solutions. Connect21 is vital to our communities' long-term economic and environmental health and aligns with regulatory initiatives in New York (REV: Reforming the Energy Vision) and Massachusetts (Grid Modernization).