NYPD Officer Anastasios Tsakos of East Northport, was struck and killed while responding to a fatal crash on the LIE on Tuesday, April 27. 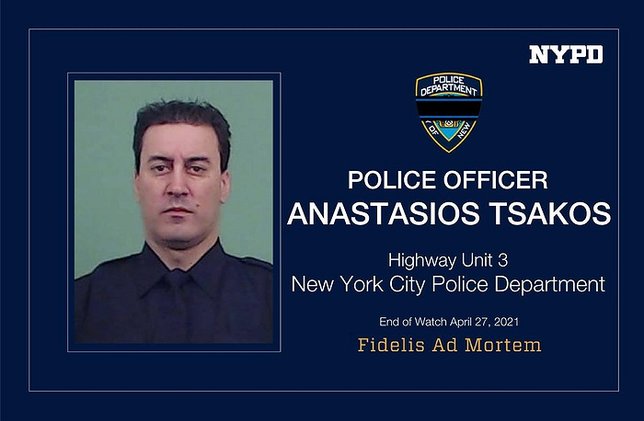 The NYPD officer who was struck and killed while investigating another accident on the LIE in the early hours of Tuesday morning was an East Northport resident with a 6-year-old daughter and 3-year-old son, according to reports.

Town of Huntington Supervisor Chad A. Lupinacci directed all flags in the township to be flown at half staff in honor of Officer Anastasios Tsakos, the 43-year-old who lived in East Northport. The highway officer was a 14-year veteran of the NYPD, according to a New York Post story.

“Officer Tsaskos was taken from his family and our community far too soon, making the ultimate sacrifice while answering the call of duty,” said Lupinacci. “May Officer Tsakos’ death serve to remind us of both the risk all law enforcement officers take to keep our communities safe and to never drink and drive.”

The driver of the car that killed officer Lupinacci, a 32-year-old Hempstead woman, is alleged to have been driving under the influence and with a suspended license. She was arrested shortly afterward.

The suspect, Jessica Beauvais, was said to have been drinking vodka that night while recording a podcast.

“We stand here this morning reminded once again in law enforcement, there is no such thing as a routine job,” Police Commissioner Dermot Shea is quoted as saying by the New York Post.