Patrick McMahon of Commack, 48, faces a maximum sentence of eight and one-third to 25 years in prison. 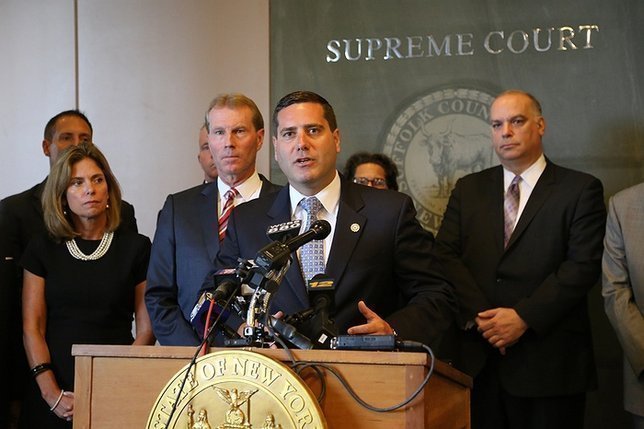 Suffolk County District Attorney Timothy D. Sini announced the indictment of a retired NYPD officer for allegedly driving while intoxicated and causing the death of his passenger in a single motor vehicle crash in Commack.
Patrick McMahon, 48, of Commack, is charged with Aggravated Vehicular Homicide, a B felony; Manslaughter in the Second Degree, a C felony; two counts of Vehicular Manslaughter in the Second Degree, a D felony; Aggravated Driving While Intoxicated, an unclassified misdemeanor; two counts of Driving While Intoxicated, an unclassified misdemeanor; Reckless Endangerment in the Second Degree, an A misdemeanor; Reckless Driving, an unclassified misdemeanor; and Speeding, a traffic infraction.
“There is no excuse in this day and age to drive drunk, particularly for this defendant as a former member of law enforcement,” District Attorney Sini said. “He made the reckless, senseless decision to put the lives of his passengers and the lives of other motorists on the road in danger, and that decision proved fatal.”
At approximately 2 a.m. on Jan. 13, McMahon was driving a 2018 Infiniti Q60 westbound on Dovecote Lane on his way home from Blush Night Club, located at 53 Veterans Memorial Highway, with two passengers in his vehicle. McMahon allegedly crossed into the eastbound lane, mounted the curb and drove onto the front lawn of the residence at 96 Dovecote Lane. As the vehicle crossed the lawn, it struck a brick pillar and multiple trees before overturning and coming to a stop on the front lawn of the residence located at 94 Dovecote Lane. Two of the Infiniti’s wheels were sheared off the vehicle and landed on the opposite side of the street.
Steven Sarvis, 32, of Ronkonkoma, a passenger in the backseat of the Infiniti, was transported to St. Catherine of Siena Medical Center in Smithtown where he was pronounced dead.
A blood test revealed McMahon had a blood alcohol level of 0.18 percent approximately an hour and a half after the crash occurred.
McMahon was arraigned on the indictment today by Suffolk County Acting Supreme Court Justice Fernando Camacho. Bail was set at $125,000 cash or $250,000 bond. He is due back in court on June 12.
If convicted of the top count, McMahon faces a maximum sentence of eight and one-third to 25 years in prison.
This case is being prosecuted by Assistant District Attorney James Curtin, of the Vehicular Crime Bureau.
A criminal charge is an accusation. A defendant is presumed innocent until and unless proven guilty.