Suozzi: "The aerospace and defense industries are a critical component of our district’s economy and important for job creation." 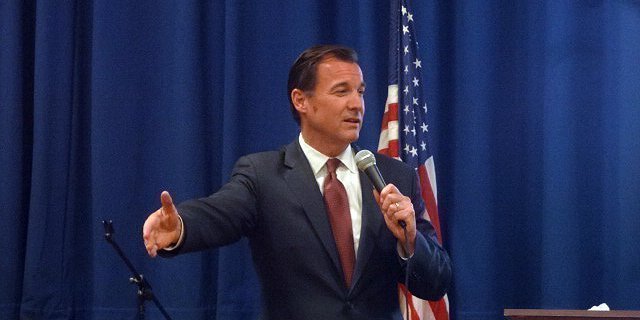 Long Island, NY - April 27, 2018 - Today, Congressman Tom Suozzi (D – Long Island, Queens) announced that Northrop Grumman Systems Corp., Bethpage, New York has been awarded a contract of $7,255,294 by the Department of the Navy to develop machine learning algorithms (MLAs) for the Reactive Electronic Attack Measures (REAM) Program. The project is expected to be completed by December 2019, with all work being done on site in Bethpage.
“The aerospace and defense industries are a critical component of our district’s economy and important for job creation. This contract is great news for Northrop Grumman, and for people living on Long Island. It helps sustain Long Island’s legacy of being the Cradle of Aviation and Hi-Tech Island,” said Congressman Suozzi.
Northrop Grumman Systems, headquartered in West Falls Church, VA, is the fifth-largest defense contractor in world. The company was formed in 1994 when the Northrop Corporation purchased Grumman Aerospace Corporation. Grumman, known for the Wildcat and Hellcat fighter aircraft and the Apollo Lunar Module, was once Long Island’s largest employer.
“Northrop Grumman was pleased to win this contract and continue our work on the REAM program.  This award is further recognition of Northrop Grumman’s long-standing legacy in Bethpage as a leading provider of advanced electronic warfare capabilities for our warfighters.  We are grateful for the support and strong leadership of Congressman Suozzi on the House Armed Services Committee,” said Tom Tack, Site Lead, Northrop Grumman Bethpage.
Congressman Suozzi is a member of the House Armed Services Committee. He sits on the Tactical Air and Land Forces Subcommittee and the Oversight and Investigations Subcommittee.