Miller: "It is wonderful to see someone like Sydney Brett, who has been bullied herself, stand up against bullies and help others learn how to do so too." 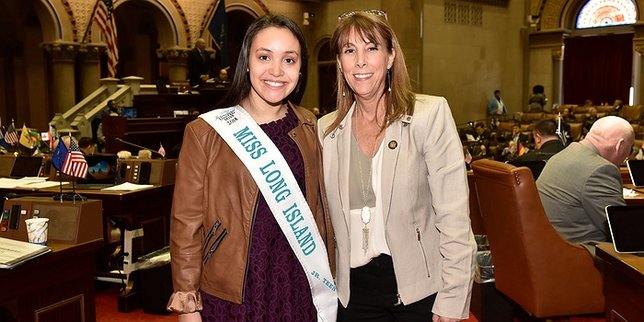 Long Island, NY - April 26, 2018 - Assemblywoman Melissa Miller (R,C,Ref-Atlantic Beach) was pleased to welcome and introduce Sydney Brett, a Long Beach High School junior, and her family to members of the Assembly on Monday, April 23. Last year Sydney, who has been physically and verbally bullied, launched a nonprofit called Sydney’s Smiles, which aims to help children, young adults, parents and teachers put an end to bullying with the proper education, resources and tools. Having dyslexia, Sydney also hopes the organization will help eliminate the negative stereotypes associated with having a disability that isn’t outwardly obvious to others. Sydney also holds the USA National Miss title of New York Junior Teen among girls between the ages of 13 and 15.
“Bullying is becoming an increasing problem in today’s world, with technology giving bullies access to their victims around the clock,” said Miller. “It is wonderful to see someone like Sydney, who has been bullied herself, stand up against bullies and help others learn how to do so too. The fact that she is not only advocating to put an end to bullying, but also teaching others how they can help by fostering an environment that promotes acceptance and inclusion, is fantastic. Not all disabilities can be seen on the surface, and eliminating the stereotypes that come with them will help young adults feel more comfortable in their own skin. Sydney has taken something negative in her life and has overcome it to turn it into something positive by helping others. She is a winner and I am so proud to know such a strong and caring young woman as Sydney.”