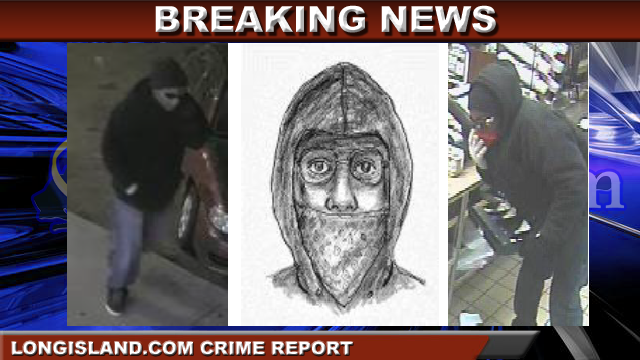 Police are on the hunt for the person or person(s) responsible for the series of commercial business robberies that are happening throughout Nassau County. The latest robbery occurred at the New Hyde Park Subway restaurant store.

According to Robbery Squad detectives, a male black, 6’ tall with a medium build, in his mid-twenties with a dark complexion, wearing a dark colored hooded jacket, dark sunglasses, a dark cloth across his face, dark gloves, blue jeans and tan work boots entered the Subway store located at 1201 Jericho Turnpike armed with a large kitchen knife.  He demanded money from the female counterperson, 20, who complied opening the cash register.  The suspect took an undisclosed amount of cash before fleeing on foot northbound on N. 12th Street.  There were no customers in the store at the time of the incident.  No injuries were reported.  This Robbery is being investigated as part of the recent pattern.