Petty Officer Third Class Daniel Vintimilla joined the Navy three years ago and was the first generation in his family to serve. 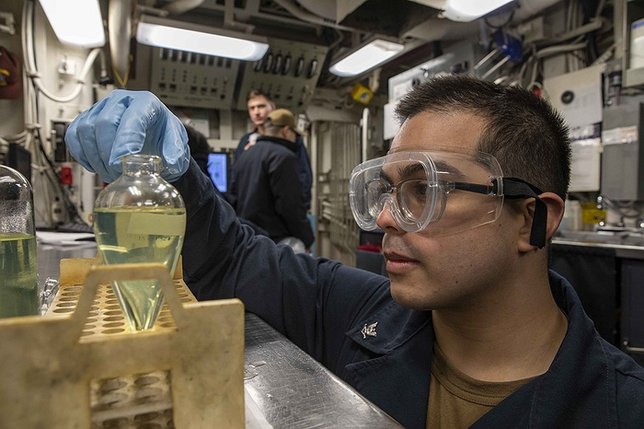 A 2017 Commack High School graduate and native of Commack, New York, is serving aboard USS Iwo Jima, a U.S. Navy Wasp-class amphibious assault ship.
Petty Officer Third Class Daniel Vintimilla joined the Navy three years ago and was the first generation in his family to serve.
"I aim to make a name for myself and to be as successful as I can be to make up for the sacrifices my parents made for me," said Vintimilla.
Today, Vintimilla serves as a machinist's mate responsible for working on, operating and maintaining marine boilers which provide steam for propulsion of naval ships.
"I also test the test and treat water, fuel and oil that we use for propulsion boilers and associated equipment," said Vintimilla.
Iwo Jima is the seventh Wasp-class amphibious assault ship and the second ship in the U.S. Navy to bear that name. The ship was named for the Battle of Iwo Jima of World War II.
According to Navy officials, amphibious assault ships are designed to deliver U.S. Marines and their equipment where they are needed to support a variety of missions ranging from amphibious assaults to humanitarian relief efforts. Designed to be versatile, the ship has the option of simultaneously using helicopters, Harrier jets, and Landing Craft Air Cushioned (LCAC), as well as conventional landing craft and assault vehicles in various combinations.
According to Vintimilla, the values required to succeed in the Navy are similar to those found in Commack.
"Commack taught me to excel in problem solving in situations that I have experienced and scenarios that come up unexpected," said Commack.
Though there are many opportunities for sailors to earn recognition in their command, community and career, Vintimilla is most proud of saving enough money to buy a house for future investment.
As a member of the U.S. Navy,  Vintimilla, as well as other sailors, know they are part of a tradition providing the Navy the nation needs.
"Serving in the Navy allows me to open up doors for more opportunities and jobs for the future though the different programs and qualifications I have and can obtain throughout my Naval career." added Vintimilla.