The first Alive After Five of 2019 will happen Thursday, June 27, and run every other Thursday after, with four dates total. Check out this summer's themes 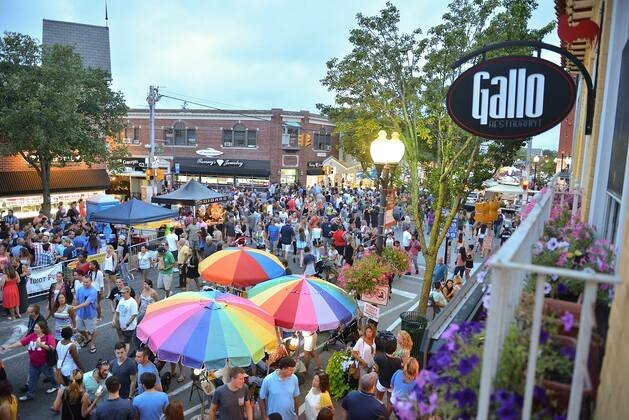 The 2019 themes for the Alive After Five series in Patchogue have been finalized. For the first time, a Pride theme will be incorporated in one installment of the hugely popular street festival. The year’s first Alive After Five will also mark LGBTQ Pride in the streets of Patchogue.

That festival will kick off on Thursday, June 27, starting at 5 p.m. June also happens to be Pride Month nationwide. “There’s been a lack of recognition for the LGBTQ community in the immediate area,” said Jacqueline Routh, who chairs the Alive After Five committee for the Greater Patchogue Chamber of Commerce, the events’ organizer.

The Pride-themed Alive After Five will be followed by three other themes where the chamber typically incorporates into the summer festivals. Thursday, July 11, will be dedicated to Women in the Arts. The July 27 festival, entitled “A Salute to the Troops,” will honor  the U.S. Military. And lastly, the fourth installment, on August 8, will be centered around Cultural Diversity.

For one, they will be seeking nominations for honorees who have made positive impacts in the communities, be it the LGBQT community, for example, or the community at large for special presentations. For her part, Routh pointed to the amazing progress in popularity the Alive After Five festivals have made, with some in recent years attracting 25,000-plus people to the village.

David Kilmnick, president LGBT Network, which is based in Bay Shore, called Patchogue Village and Alive After Five the “perfect fit” for a now expanded Long Island Pride Month efforts across Nassau and Suffolk counties. “The LGBT Network is going to be opening one of its main centers in Patchogue and to be able to celebrate pride with all the great businesses, bars, restaurants and people of Patchogue is just a great addition not just for this year’s Pride Month but for years to come.”

The group recently expanded its efforts from a three-day celebration in Long Island to a two-week celebration that highlights some of the island’s “Best downtowns to visit and live,” he added. “We are proud to recognize Pride Month and celebrate the LGBT community at this year’s first Alive After Five,” said David Kennedy, the chamber’s executive director.

“In Patchogue, everyone is always welcome!”