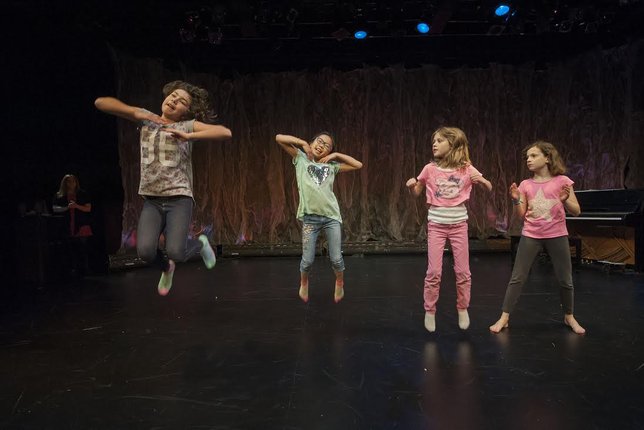 Sag Harbor, NY - April 24, 2014 - Bay Street Theatre is pleased to announce its upcoming Summer Kids Theater Camps in August. The camp is for ages 7-9 or 9-12 as listed in the schedule. The camps will be at the Southampton Arts Center and Studio 3 in Bridgehampton and run 9:30 am – 12:30 pm each day of the 5-day camps.

Southampton Arts Center
25 Jobs Lane
Southampton, NY 11968
$450 per child for one week of camp
$800 per child when you sign up for two weeks

August 4-8
Land of Make Believe! (Ages 7-9)
Fairy tales collide in this weeklong summer camp where students create their own play. Could Jack climb up the beanstalk to rescue Cinderella only to be hauled away on a broomstick by the wicked witch of the west? Who knows.... it just might happen....

August 11-15
My Life As A Musical: Camp! (Ages 9-12)
What if you got trapped in a musical version of your life? This whirlwind 1-week camp gives campers the opportunity to find out. Using some of pop music and Broadway's favorite songs, every camper has their chance to shine and discover what it might be like if their lives were musicals, too!

August 4-8
Green Eggs and Hamlet! (Ages 9 – 12)
Doctor Seuss meets Shakespeare's Great Dane in this hilarious comedic version of one of the bard's great tragedies. Campers will play with Shakespeare's text and add their own comedic flare in this zany fun and funny 1-week camp.

August 25-29
Shakespeare Stories: A Mini Midsummer Dream (Ages 7-9)
Campers will embark on a weeklong journey into Shakespeare's classic comedy. Magic, Fairies, and Donkeys romp through kids' imaginations as they learn about and perform some of Shakespeare's funniest words and plot twists.

The camps will be led by Julia Motyka, Bay Street Theater’s Director of Education and Megan Minutillo, Bay Street’s Summer Education Intern. “For the first time, this summer,” says Motyka, “we are thrilled to give campers the unique opportunity to meet and interact with some of Bay Street’s incredible roster of Mainstage artists as part of a special activity available during each camp.”

Julia Motyka is an actor, producer, and teacher with a national reputation and over a decade of professional experience. As an activist and educator Julia has taught for organizations nationwide and developed programming for The Trinity School, SF Shakes and The Cripple Creek School District. In 2008, in partnership with the Hastings Youth Council (Hastings-on-Hudson, NY), Julia created Living Shakespeare which ran for 4 years and served nearly 100 children in its final session alone. Currently, she is a proud ASTEP volunteer. As an actor she has appeared Off-Broadway and in some of the nation’s top regional theatres receiving awards in San Francisco, Denver, and LA. As a producer her company RGM co-produced the Off-Broadway production of Rooms: A Rock Romance, nominated in 2009 for three OCC Awards.

Megan Minutillo is a writer, playwright, director, producer, and theater teacher. She is the founder of the website The Write Teacher(s), and she is also the creator of the Lucky Disaster Concert Series. Her articles have appeared on HelloGiggles.com, I AM THAT GIRL, Glass Heel, and So Worth Loving. Megan holds a M.A. in educational theater from NYU, and is currently at work on writing a feature film.

Camp size is limited and always sells out. For payment and more information, please call Lorien at 631-725-0818 ext. 129. For more information about the camps or other programming at Bay Street Theatre, log on to www.baystreet.org.

Bay Street Theater is a year-round, not-for-profit professional theater and community cultural center which endeavors to innovate, educate, and entertain a diverse community through the practice of the performing arts. We serve as a social and cultural gathering place, an educational resource, and a home for a community of artists.