Irving Roth was deported with his family in 1944 to Auschwitz where most of his family was murdered. 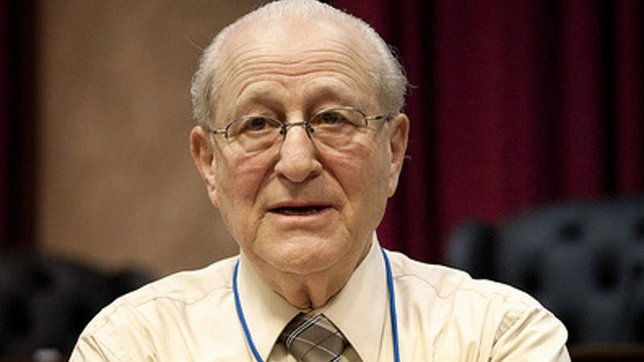 Garden City, NY - April 23, 2018 - A week after a startling survey revealed that two-thirds of US millennials do not know what Auschwitz is, Irving Roth, who survived the infamous death camp, will speak to students at Adelphi University on Monday, April 23, in an event organized by Chabad Adelphi and co-sponsored by a coalition of university organizations.
Irving Roth was deported with his family in 1944 to Auschwitz where most of his family was murdered. He was later forced on a 'Death March' and liberated by the U.S. Army from Buchenwald. He lives on Long Island and is director of the Holocaust Resource Center at the Temple Judea in Manhasset.
“73 years after the liberation of Auschwitz, there’s a real urgency to hear testimony from survivors before it’s too late,” said Rabbi Yankel Lipsker, director of Chabad in Garden City “We are expecting a large turnout from a cross-section of the Adelphi community to hear Irving Roth’s inspiring talk on how he survived the darkest of times.”
The lecture is sponsored by Adelphi’s Department of History, Hillel, Chabad Adelphi, Office of Diversity and Inclusion and the Office of the Provost. It is open to the public.
The event will take place 3:30 to 5 p.m. in the University Center Rooms 215 and 216.