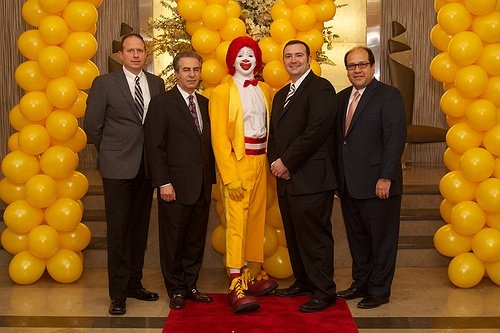 Deer Park, NY - April 23rd, 2015 - It was in early 2000 when high school junior Matt Gottesman heard about a new McDonald’s being built in his hometown on Long Island. At the time, he was working as a cashier at an entertainment center down the road to earn some extra spending money. Dissatisfied with the monotonous work environment, Gottesman’s colleagues decided to apply for jobs at the Golden Arches and urged him to join them. Gottesman hesitated at first but ultimately filled out an application. Following an interview with the manager of the Hunt Enterprises-owned restaurant, Gottesman was immediately hired as a part-time crew person. Fifteen years later, Gottesman, 32, is still with the same McDonald’s, albeit in a much different capacity.

“Every day is a new adventure. The business is constantly changing and there’s always something new to face,” says Gottesman, now the general manager of the Deer Park McDonald’s. “But it’s always something I can tackle together with my team. It brings everyone closer together, and over the years, we’ve become like a gigantic extended family.”

It’s an apt description for Gottesman, who oversees a staff of 65 people. Recently, his managerial leadership was honored with a 2014 Ray Kroc Award, which recognizes the top 1% of restaurant managers at both independently owned and operated franchise restaurants and McDonald’s corporately-owned restaurants across the United States. Named after McDonald’s legendary founder, the award also celebrates employees who achieve success in operational excellence and customer satisfaction.
“As an organization that prides itself on recognizing and promoting our outstanding talent, Matt embodies the success story we hope to provide for all our employees,” said Katie Hunt, a Long Island McDonald’s franchisee. “With a strong work ethic and a positive attitude, a part-time job at McDonald’s can truly blossom into a rewarding career.”

Gottesman credits his early days at McDonald’s for instilling in him a sense of responsibility and proving that hard work does truly pay off.

“How often are you going to see a 17, 18-year-old kid learning how to run a business? One thing the company has taught me is that if you’re hungry for it, if you’re driven, and you want to do a good job everyday, the sky’s the limit.”

About McDonald’s Careers
Even presidents and CEOs of major corporations had to get their start somewhere. And for many of them, that start was a job at McDonald's. We're proud of the many people who chose to stay with us over their careers, building long-term success for themselves and their families. McDonald’s provides its employees with challenging careers, quality benefits and the best opportunities around. To learn more about how McDonald’s helps people make their career goals a reality, visit www.McDonaldsNewYorkTriState.com.

About McDonald’s New York Tri-State Restaurants
McDonald’s is one of the world’s best-known brands and is one of the global leaders in food service. There are more than 600 McDonald’s restaurants, owned by 100 franchisees, located throughout the New York, New Jersey and Connecticut Tri-State area. Visit www.McDonaldsNYTriState.com or follow us on Twitter @McDNYTriState for more information about other McDonald's area programs.