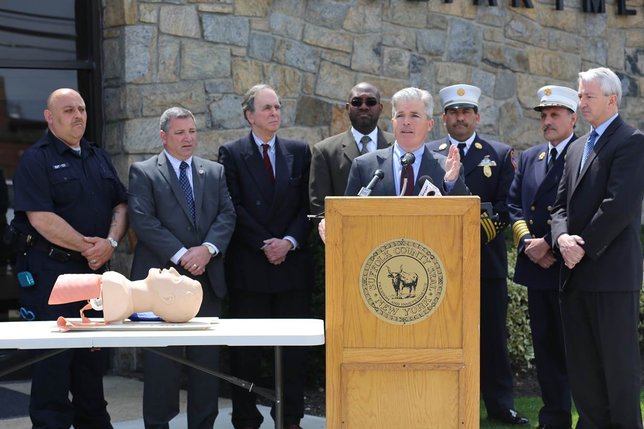 “Through government and community partnerships, we can expand the pool of future first responders and equip them with the training they need to respond to opioid overdoses,” said County Executive Steve Bellone.  “Narcan has shown time and again the ability to reverse the effects of an overdose and give those individuals a second chance at life.”

“As we battle the heroin and opioid epidemic here on Long Island, this training class will be the inaugural effort between the State of New York and the County of Suffolk to begin training those who may find themselves in a position to make a difference between life and death,” said State Senator Phil Boyle, Chairman of the New York State Senate Committee on Alcoholism and Drug Abuse and Chairman of the Senate Task Force on Heroin and Opioid Addiction.  “Narcan is an antidote for heroin overdose that we pray we never need to use but we will thank God we have it if we do.”

“We are very proud to host a Narcan training class tonight here at the Deer Park Fire Department,” said Fire District Commissioner Lieutenant Mike Macaluso.  “We all say everyone deserves a second chance in life, none of us are perfect.  Narcan gives people that second chance.”

Tuesday’s announcement concluded with a live demonstration of the administration of the heroin antidote Narcan by Suffolk County Director of EMS, Bob Delagi.

For more Suffolk County news, as well as video footage and photos of the Narcan announcement, visit www.facebook.com/stevebellone.