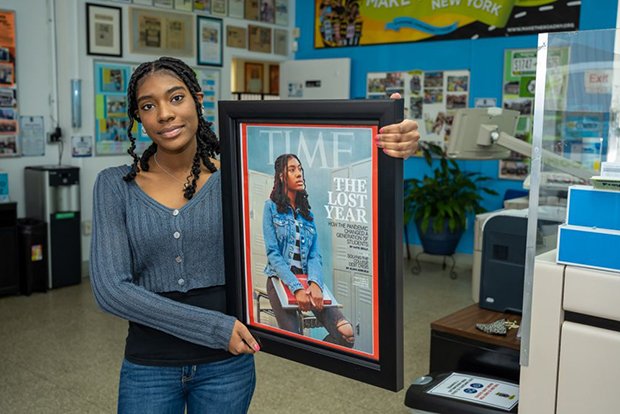 Her story is probably familiar to many high school students who have had to navigate the isolation of the Covid-19 pandemic, remote education, and the college admission process. Twyla Joseph, a 17-year-old Islip Terrace resident who attends Central Islip High School, had her experience featured in a Time Magazine article in their April issue. Joseph appeared on the cover of the magazine for the story titled "The Lost Year."

The article chronicles how she often felt alone and anxious while making decisions on what college to attend and what career to pursue, according to a press release from the Town of Islip, which presented Joseph with a Certificate of Recognition from Islip Town Supervisor Angie Carpenter, on behalf of the members of the Town Board recently.

Time magazine was introduced to Joseph through her volunteer work with the group, Make the Road Action, which advocates for justice in education, immigration and the criminal justice system.

"Twyla has become an inspiration for so many. It's been a tough year for everyone, and certainly for students of all ages," said Supervisor Carpenter.

Joseph has since sent applications to several colleges and is awaiting their decisions.

"The story that I share is the story of many people, especially students in my community, who also had to go through this during the pandemic," said Joseph.