Hempstead to be First to Test Electric Garbage Trucks

Commitment by town to convert their entire fleet to clean energy vehicles by 2040. 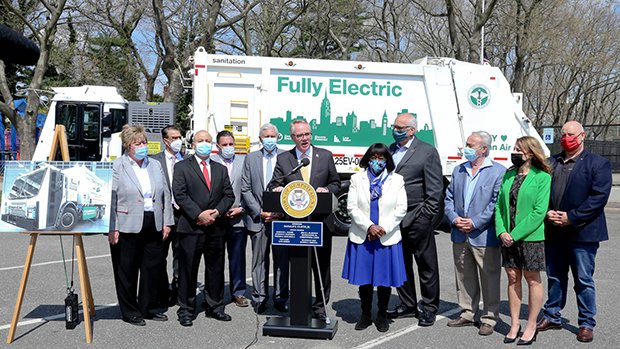 Long Islanders know the sound well. Garbage trucks rumbling down the road to pick up the trash usually twice a week. The day is coming when these sanitation vehicles will silently slide up to your house to remove your garbage, all with zero emissions and actually reducing air pollution.

That day is closer than you think thanks to a pilot program in Hempstead Town, which touts theirs as the first on Long Island to use electric garbage trucks in their fleet. It is a part of a larger program that Town Supervisor Don Clavin says will convert the entire fleet to clean energy vehicles by 2040. The commitment is called “Vision 2040” and is made possible by technological advances by manufacturers of heavy vehicle equipment.

Along with colleagues on the Hempstead Town Board, Supervisor Clavin previewed the electric garbage truck at Rath Park in Franklin Square. It was there that Clavin announced the plan to make the Town of Hempstead the first municipality on Long Island to test out the Mack LR Electric Truck.

“As manufacturers race to devise the latest green technology, we at the Town of Hempstead are thrilled to take the proactive step by piloting this cutting-edge Mack LR Electric Garbage truck by the end of this year,” Clavin said. “As part of ‘Vision 2040,’ we plan to pilot more clean energy vehicles across our various departments, pursue grants and incentives, and implement the necessary infrastructure required to maintain a successful electric fleet.”

According to a press release, DSNY’s LR Electric from Mack Trucks, is only one of two currently in the world, and the Town of Hempstead would be pilot a new vehicle that should be completed and ready to test by the end of this year. The Town is already in the process of introducing new electric vehicles to its current fleet, and exploring the implementation of new charging stations at town facilities.