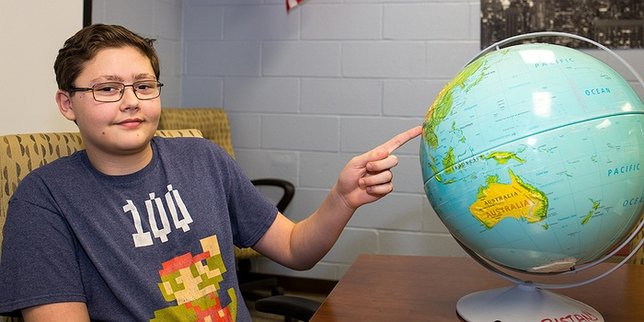 Dix Hills, NY - April 20, 2018 - Nicholas Sarris, an 8th grader at West Hollow Middle School in the Half Hollow Hills Central School District, competed in and won the 2018 National Geographic Bee New York State Championship. Sarris participated in the event with 99 other students who had qualified from New York, and will be moving on to the National Geographic Bee championship in Washington, D.C., from May 20-23, 2018.
The National Geographic Bee is an annual competition organized by the National Geographic Society, designed to inspire and reward students' curiosity about the world. Students in grades four through eight from 10,000 schools across the United States will compete in the 2018 National Geographic Bee for a chance to win college scholarships and the glory of being the National Geographic Bee Champion.
Sarris became state champion on a question regarding the longest ice-bridge in the world. The answer: Estonia. When asked how he prepared to answer questions that could be on such a broad range of geographical topics, Sarris said, “I like to watch videos and read books to learn about places I’ve never been to.”
“We are so proud to have a student from our district become state champion for the first time, and be headed to the national championship to represent New York State,” said Christina Papachristou, bee coordinator for the National Geographic Bee competition at West Hollow Middle School. “This contest really helps spark student interest in the subject, and increases public awareness about geography.”
The New York State championship took place on April 6, 2018, at the New York State Museum in Albany, NY. All 99 contestants who qualified for the state bee participated in a preliminary competition, with only ten students advancing to the final competition. Two students emerged from the final round to compete head-to-head in the championship round, which Sarris won.
“I’m so happy to have made it this far,” added Sarris. “Even if I don’t win nationals, I am sure I will have a great time!”
ABOUT HALF HOLLOW HILLS
An education-oriented community with high academic expectations, the Half Hollow Hills Central School District is located in a residential area of 50,000 people in the central part of Long Island, approximately 40 miles from New York City. Providing for the education of more than 8,000 students, the school district has five elementary schools, two middle schools and two high schools. Half Hollow Hills High Schools are fully accredited by the New York State Department of Education and the Middle States Association of Colleges and Schools. The District is committed to providing students opportunities to excel in academics, athletics and the arts.