New PAL units have been established in Elmont, Lawrence, and now Roosevelt. 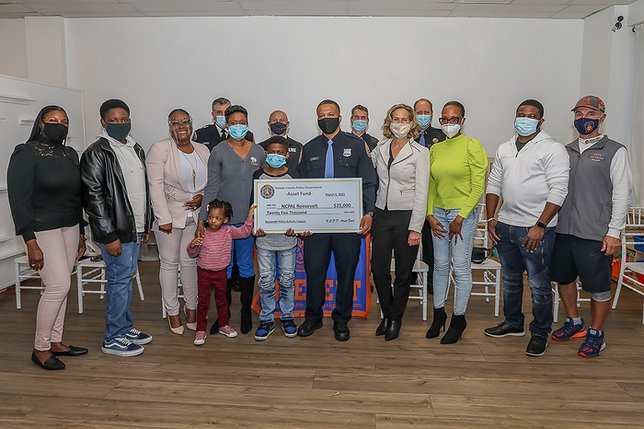 Nassau County Executive Laura Curran and Police Commissioner Patrick Ryder were joined by the Roosevelt PAL Board and community members to formally announce the creation of a new Police Athletic League (PAL) program for the Roosevelt community. In addition to establishing this new unit, the County Police Department donated $25,000 from Asset Forfeiture funds to assist with startup costs. Currently, the Nassau County Police Department provides officers to oversee 32 PAL units and interact with the youths in communities through sports, crafts, educational programs, and more.
Under County Executive Curran’s leadership, new PAL units have been established in Elmont, Lawrence, and now Roosevelt – the first new offices opened in over 50 years.
“The new PAL coming to Roosevelt is great news for the community. PAL programs offer kids the opportunity to interact with police officers in a positive setting while gaining important life skills and experiences. My Administration will continue to champion community policing initiatives that create trust and positive relationships between Nassau County PD and the communities we serve,” said Nassau County Executive Laura Curran.
“With the official opening of the Roosevelt PAL we now have another program in which our students will be able to take advantage of track, chess, double dutch, baseball, soccer and numerous arts and crafts.  This new program is extremely important to our residents and it is beneficial to both the community and the police department.  When you see students and police officers working together towards one common goal it is evident that we are  building bridges within our communities.  The $25,000 donated by the police department to this dedicated facility is an investment in our future,” said Police Commissioner Patrick Ryder.
“For generations, families across Nassau County have benefitted from the affordable, high-quality sports and educational programs offered by the Police Athletic League. I look forward to working closely with the leaders of the new Roosevelt PAL as we seek to cultivate and empower a new generation of young leaders in the communities we serve,” said Nassau County Legislature Minority Leader Kevan M. Abrahams.