City Cellar is a modern American restaurant whose menu’s strength lies both in its delivery and its diversity. 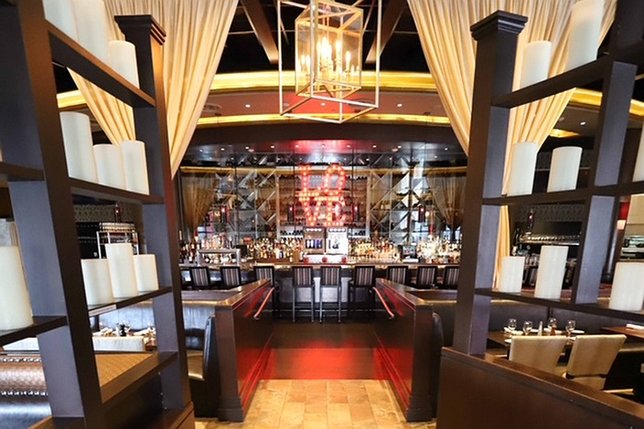 City Cellar can be described as very “light and bright,” with wood trim throughout the restaurant, chandeliers, and a 30-person bar.

When it comes to fine dining in the busy restaurant landscape that is Long Island – where nearly any type of food you can imagine is easily within reach – City Cellar – American Modern stands out from the pack as a classy establishment that has the food and atmosphere to make a repeat customer out of even the most discerning of tastes.
First opening their doors for business on January 7, 2007, City Cellar – located at 1080 Corporate Drive in Westbury – is a modern American restaurant, and according to partner Michael Abbatiello, their menu’s strength lies both in its delivery and its diversity.
“In terms of cuisine we pretty much cover the whole map,” he said. “We have home-made pastas, fresh seafood, dry-aged steaks, pizza, salads…we’re very, very well-versed in terms of menu. And we run a ‘scratch’ kitchen, so desserts, gelatos, salad dressings, butchering…everything is done in-house.”
In terms of atmosphere, City Cellar can be described as very “light and bright,” with wood trim throughout the restaurant, chandeliers, a 30-person bar, a lounge area, and a private room that can accommodate up to 150 guests, as well as a patio that can accommodate another 120.
Overall, Abbatiello notes, City Cellar is right at the cusp of being an ‘upscale’ establishment without going over the line, making it a great choice for a superior dining experience while not breaking the bank. 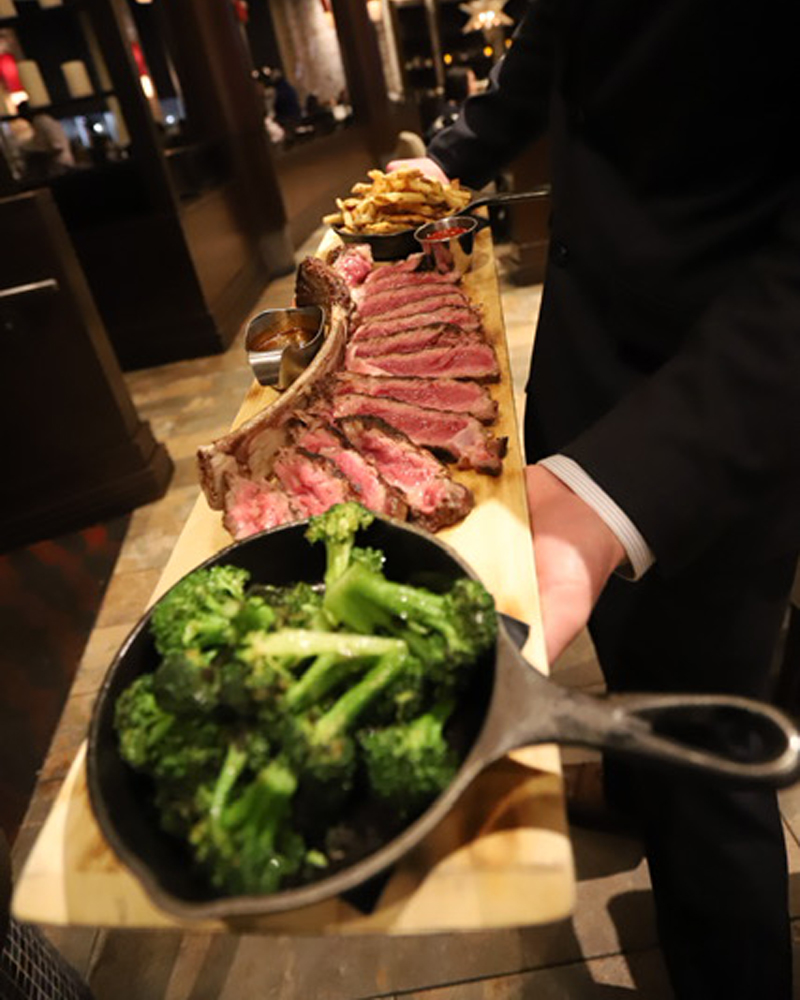 City Cellar is very well-versed in terms of menu, with home-made pastas, fresh seafood, dry-aged steaks, pizza, salads, and much more. Photo Credit: City Cellar – American Modern
“I wouldn’t consider it a fine dining restaurant, but I wouldn’t consider it casual either,” he said. “For lunch, we’re very business-driven, but we get a lot of influx from Roosevelt Field Mall and the high-end condos around here as well…we’re not a $20 check kind of place, but we’re not a $100 steakhouse, either.”
And as we slowly return to “normal” during what is hopefully the ending days of the COVID-19 pandemic, Abbatiello is adamant that City Cellar not only adheres to all local and state regulations regarding mask-wearing, sanitation, and social distancing, but actually exceeds them, ensuring the health and safety of both staff and customers at all times.
“When the pandemic hit we started ‘to go’ orders, but when we reopened it didn’t really take us that long to bounce back…now, we’re doing the same thing we’ve always done, only better. We still do ‘to go’ orders, so we’ve grown from this,” he said. “As far as health standards, we do everything we can. All tables are six feet apart, no more than ten guests at a table, all of our silverware is rolled and we have sanitizing wipes in with the silverware – which the guests really like – there are glass dividers between each booth…we’re going above and beyond.”
Abbatiello notes that he’s been involved in the restaurant business for his entire life. He has extensive training in the kitchen, and had previously worked as a chef in upscale Manhattan eateries before initially coming to work for City Cellar’s as their executive chef. After working there for several years he made the decision to fulfill his life-long dream of being a restaurateur, so he became a partner and took over operations of the establishment several years ago.
“Owning my own place was always one of my aspirations, even when I was young,” he said. “I just loved the business aspect just as much as the cooking aspect, so owning a restaurant was always my goal from the get-go.” 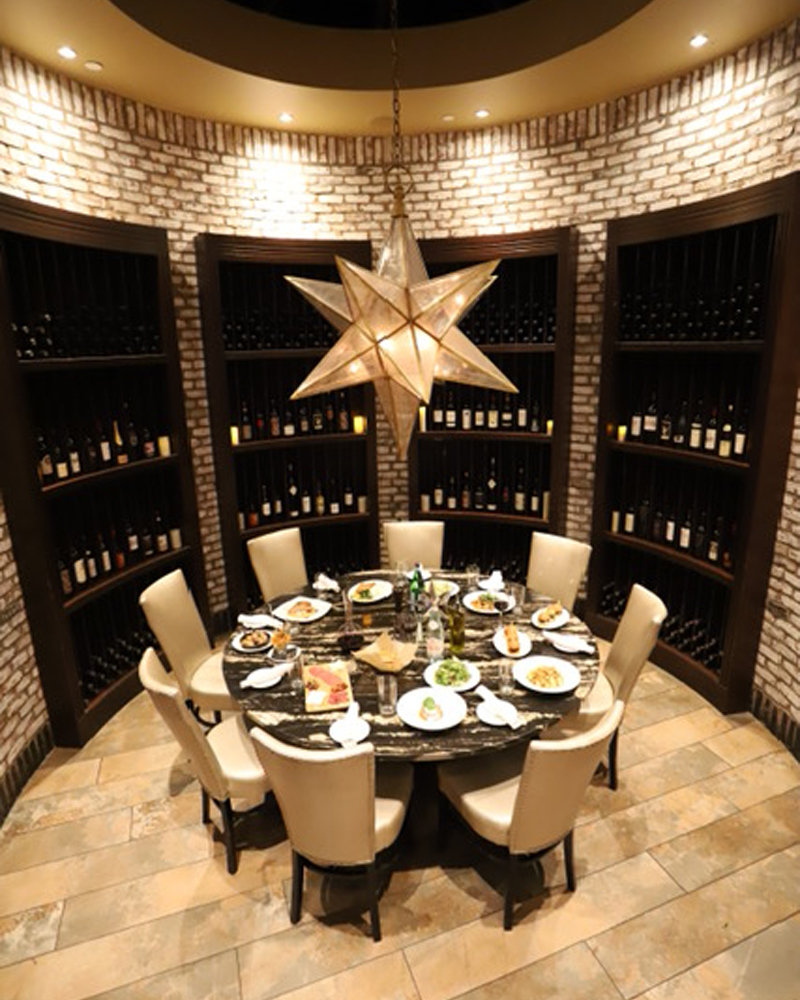 City Cellar stands out as a classy establishment that has the food and atmosphere to make a repeat customer out of even the most discerning of tastes. Photo Credit: City Cellar – American Modern
Response over the years to the excellent cuisine and atmosphere of City Cellar has been strong, Abbatiello said, with the place averaging two thousand customers a week; these impressive numbers are especially telling of the restaurant’s quality, given the fierce competition when it comes to places to eat in Westbury in general and Long Island as a whole.
“We’ve evolved a lot over the years…we didn’t always have a patio or a party room, these were new additions,” he said. “We’ve evolved over the years from being more of an everyday casual restaurant to a higher-end kind of place, so we definitely have pushed the envelope over the years, and the customers seem to appreciate it.”
In the end, Abbatiello said that a lifetime in the restaurant business has been immensely satisfying. And when it comes to City Cellar – American Modern, not only has the establishment evolved over time into the fine eatery that it is today, but the best is yet to come.
“It feels great…it’s what I’ve done my whole life, and it’s my passion. You know what they say, if you love what you do you’ll never work a day in your life, no matter how many hours I work,” he said. “It’s great meeting people, socializing, making guests happy, hosting events like weddings and communions…it’s very fulfilling in this industry.”
To find out more about City Cellar – American Modern, call (516) 693-5400 or visit their website at www.citycellarny.com.