The victim pressed the panic alarm and the masked subject fled on foot.

NCPD are investigating a Robbery that occurred on Saturday, April 15, 2017 in North Merrick.

North Merrick, NY - April 17, 2017 - The Major Case Bureau is investigating a Robbery that occurred on Saturday, April 15, 2017 at 7:09 p.m. in North Merrick.
According to Robbery Squad detectives, an unknown male subject entered the Subway located at 1341 Jerusalem Avenue, displayed a large kitchen knife as he approached the 55 year old male victim and demanded money from the register. The victim pressed the panic alarm and the subject fled on foot with no proceeds. No injuries were reported. 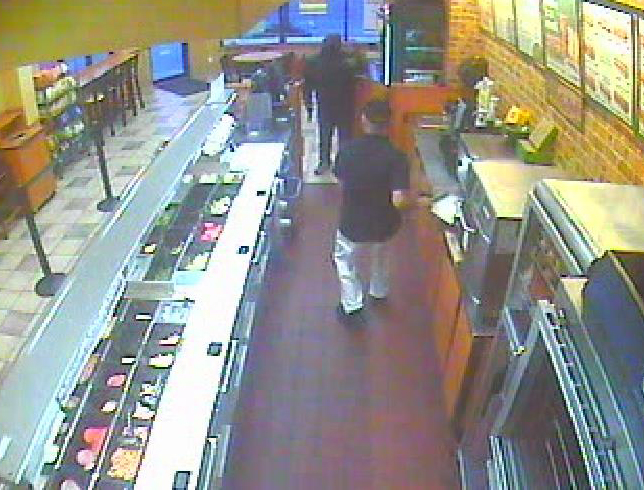 Surveillance phto of the suspect in an attempted robbery of the Subway located at 1341 Jerusalem Avenue, North Merrick. Photo Credit: NCPD
The subject is described as 5’8” tall, average build, wearing a dark hat, dark jacket, blue jeans, white sneakers, a gray scarf covering face and gray gloves.
There was 1 employee and no customers inside the store at the time of the robbery.
Detectives request anyone with information regarding this incident to call Crime Stoppers at 1-800-244-TIPS.  All callers will remain anonymous.