Eight Best Things to Do in and Around Port Washington

This North Shore town is filled with history, water adventures and some notable pizza. Check out our list of 8 things to explore in Port Washington 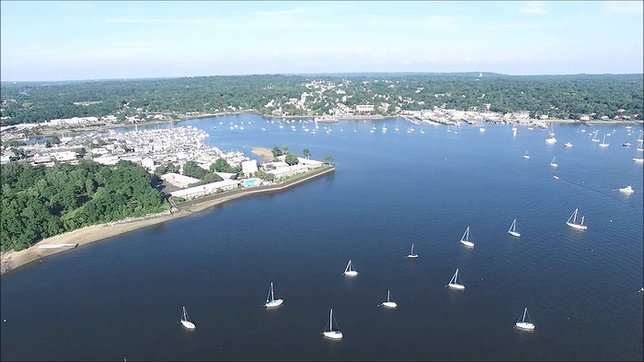 Located just off of Main Street in Port Washington is the Blumenfeld Family Park. The park has a large central green complete with a paved path winding through the park. This park is perfect for a day of fun with the family, and there are a number of different play areas and activities for children of all ages. The unique feature of Blumenfeld Family Park is the water playground at the back of the park which has different water features for children to play in! There are fountains in a splash pad, large buckets to spill water, and a mushroom waterfall! This park is perfect for cooling off on a hot summer day.

Sands Point Preserve was F. Scott Fitzgerald’s inspiration for the infamous East Egg of The Great Gatsby. Indeed, the Sands Point Preserve estate is like stepping into the pages of this classic novel. Sands Point Preserve is the original Guggenheim estate and it features all the luxury and style of the early 20th century. Today, visitors can explore the large estate including both the magnificent mansion and the stunning grounds. Sands Point Preserve has made its TV and film debut as well, and you might recognize the estate from shows like Law and Order, The Blacklist, and Boardwalk Empire as well as films like The Godfather and Scent of a Woman.

The Sands-Willets House is named after two influential Long Island families and it serves as an example of the typical farmhouses of the region. Originally occupied by the Sands family between 1735 and 1845, this home is one of the oldest homes still remaining on Long Island. The home was purchased in 1845 by Edmund Willets, a prominent Quaker and active abolitionist before the Civil War. Today, the house is open to visitors as a museum. The museum features knowledgeable guides and collections of Victorian-era artifacts and style. The Sands-Willets House was even featured on the Emmy Award-winning show Boardwalk Empire which is set in Prohibition-era Atlantic City. This small slice of history is a must-see.

Up For Some Paddle Board

Manorhaven Beach Park is the perfect place for enjoying the coast of Long Island. The picture-perfect Manhasset Bay offers a number of outdoor activities like a boathouse, sunbathing, fishing, and a boat ramp. Take a break from the beach and try the newly opened North Hempstead Manorhaven Pool Complex which has both the main pool and a separate swim lap area. The pool complex also has its own water slides and a unique play feature in a separate kiddie pool area for younger kids. This isn’t your average community park.

Port Sailing School in Port Washington believes everyone has the ability to sail a sailboat! The Port Sailing School offers lessons for all levels of sailors. Once you master the ASA 101 Course, you’re welcome to sail any of their boats on your own. Owner Chris Nihill has been teaching sailing since 2001, and he hopes to pass his passion for sailing on to all his guests! Port Sailing School currently has over 30 boats amongst its three locations, and they regularly host trips to the Caribbean.

Salvatore’s Coal-Fired Pizza calls itself an old-fashioned pizza parlor. Salvatore’s serves the best pizza in Port Washington using a family tradition that dates back to the 1930s when the owners family opened Patsy’s on First Avenue in Harlem. Guests travel from all over New York to try their famous coal-fired pies.