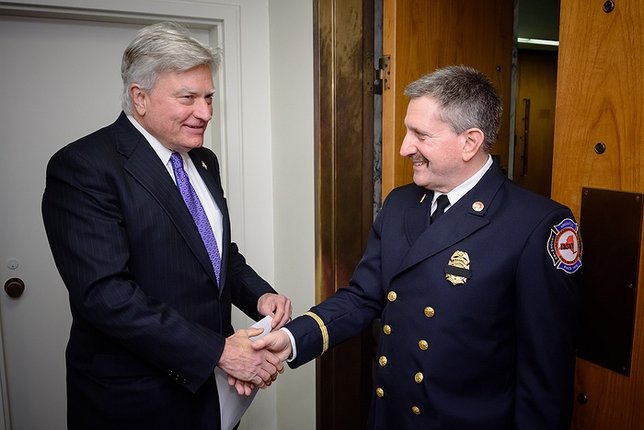 This bill extends the already-existing Volunteer Firefighters’ Benefit Law to cover all instances of melanoma, as well as cancers of the digestive, hematological, lymphatic, urinary, prostate, neurological, breast, and reproductive systems.

“This bill effectively updates VFBL, addressing the 21st-century fires and dangers faced by today’s firefighters. This is a benefit that paid firefighters already have, and rightfully so. But fire and smoke, and the cancers they cause, do not discriminate, and neither should New York State. This bill passed in part because of critical leadership of sponsor State Senator Michael Nozzolio, and co-sponsor State Senator Joe Griffo. Volunteer firefighters save the taxpayers of this state over $3 billion annually. FASNY asks that the State Assembly now do the right thing and act to protect those who risk their lives to protect the public’s safety, and as well as its wallet.”

“I want to thank the Senate for passing this important legislation, providing the same coverage for cancer to volunteer firefighters as their brothers and sisters in the career fire service,” said Daniel Schwertfeger, President of the New York State Association of Fire Chiefs.

Homes and other buildings today are built much differently than those in the past. Plastics and other synthetic materials are in much greater use than ever before and when these materials burn, they produce a staggering variety of chemicals and toxins.

Every building is now packed with electronics – TVs, computers, smartphones – which are similarly toxic. Modern firefighters, in both urban and rural departments alike, face far greater dangers than their predecessors.