The Colonials are looking to build off of their improved success as the season continues. 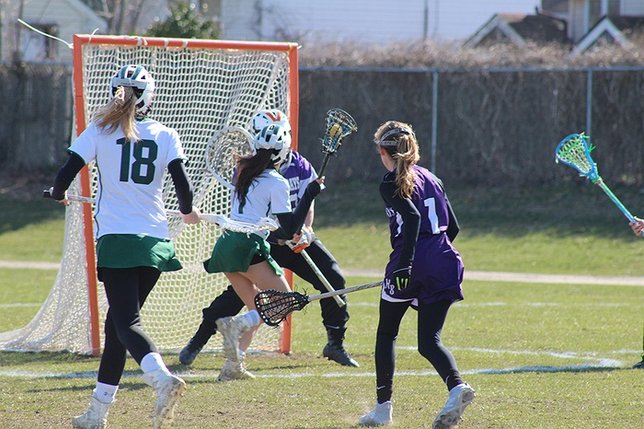 Mastic Beach, NY, April 12, 2018 – Following a down season last year, the William Floyd girls’ varsity lacrosse team is off to a much better start in 2018. After finishing with only one win in 2017, the Colonials already have doubled that total, and are looking to build off of their improved success as the season continues.
“We definitely want to improve on last year’s record,” said first-year varsity head coach Paul Vassallo. “We want to see good team play, sportsmanship and healthy attitudes.”
Coach Vassallo was able to see that good team play that he was hoping for on Monday, April 9, when William Floyd beat Hampton Bays by a score of 14-3. The Colonials were led by senior Cassidy Connelly, junior Brianna Ditillo, and sophomore Keanna Sarmiento as they all registered three goals in the win. Junior Emily Mehnert also contributed to the all-around team effort with her team-leading six assists.
“I think that it’s nice that we have a very unselfish offense that likes to share the ball,” said Coach Vassallo after the victory. “We don’t rely on any one player to get the job done.”
A focal point for Coach Vassallo in his first year as head coach was allowing his team to bond more, which would help develop good chemistry both on and off the field. “We have held team breakfasts and I have had the girls do brag sheets to help build their confidence before each game.” Coach Vassallo believes that the camaraderie off the field will lead to better results on the field. So far this season, his strategy has paid off.
In the spirit of developing team chemistry, the team also took a field trip on April 4 to watch the number one nationally ranked Stony Brook girls lacrosse team play. One of the Seawolves top players is William Floyd alumna Courtney Murphy, who recently broke the NCAA career goals record with her 290th career goal.
When asked about what he hoped his team got out of watching one of the best teams in the world and a former William Floyd star player, Coach Vassallo said, “They were able to see the fundamentals of the game, the patience of play and what makes a great team play great every game.” He also added that being able to watch a local girl in Murphy achieve success with a top college team can show his girls that they can achieve anything in the sport if they are dedicated and put enough work into it.
This season also marks the return of the William Floyd youth lacrosse program. Coach Vassallo said that the lacrosse program as a whole is on the rise thanks in large part to the youth program making a comeback.