Hampton Bays students competed at the tournament, but the winners were from Los Angeles. 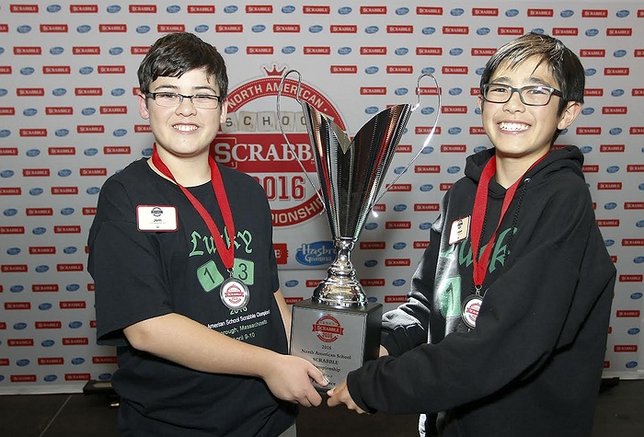 Jem Burch (left) and Cooper Komatsu pose with the Champion’s trophy after defeating more than 80 teams at the 2016 North American School SCRABBLE Championship.

Foxborough, MA - April 10, 2016 - After a two-day battle of words and wits, student SCRABBLE players Jem Burchand Cooper Komatsu from Los Angeles, C.A. defeated more than 80 teams from the U.S. and Canada in the 2016 North American School SCRABBLE Championship. Top School SCRABBLE players ranging in grades 4 through 8competed in the 14th annual North American School SCRABBLE Championship at Gillette Stadium in Foxborough, Massachusetts, home of the NFL New England Patriots. During fast-paced tournament play, teams of two racked up their highest scores and left their best moves on the board in pursuit of the distinguished Championship trophy, a $10,000 grand prize and the prestigious title of 2016 School SCRABBLE Champions.
“Holding the North American School SCRABBLE Championship at Gillette Stadium, a place where dedication and teamwork play a large part in winning championships, was an extraordinary experience for everyone involved,” said Jonathan Berkowitz, senior vice president of marketing, Hasbro Gaming. “We want to thank all of the coaches and teams who traveled here to compete, and congratulate this year’s winners on their incredible SCRABBLE skills.”
During this year’s North American School SCRABBLE Championship, viewers followed every tile turn and word combination on a live broadcast via Mind Sports International’s interactive RFID SCRABBLE system. Jem and Cooper, whose team name is Lucky Thirteen, out-spelled their opponents in 6 of the 7 tournament rounds, catapulting them into the final matchup where they defeated Javier Contreras and Matias Shundi of Chapel Hill, N.C., 411 to 401. The final game was projected throughout the stadium, drawing cheers from family members and friends, and included several high scoring words including agnosia, jarina and quarrels.
“We’re so proud to be named this year’s Champions and it wouldn’t have been possible without practice, team work and advice from our coach,” said Cooper Komatsu from Culver City Middle School. “Joining the School SCRABBLE program has been such a rewarding experience for Jem and I. We’ve met great friends by playing competitively and can’t wait to celebrate this amazing win.”
Young word enthusiasts who are interested in playing competitively and joining the dynamic community of School SCRABBLE players can find out more information on how to be involved in their local programs by visiting schoolscrabble.us.
Following the 2016 North American School SCRABBLE Championship on Wednesday, April 13, Hasbro will celebrate National SCRABBLE Day with fans on social media. Originally referred to as the CRISS CROSS WORDS game, Alfred Mosher Butts invented the SCRABBLE game in 1933. Today, novice and professional players can experience great SCRABBLE gameplay moments at home, in the classroom or on the go through various physical and digital platforms including SCRABBLE for iPad, iPhone and Android from Electronic Arts.  For more information on the SCRABBLE game and ways to celebrate National SCRABBLE Day, visit Hasbro.com/SCRABBLE and follow @HasbroNews on Twitter.
Mindsports International (MSI) is the official host for Hasbro Inc.’s North American School SCRABBLE Championship. MSI brings innovation to mindsports events across the world, and is the creator of the revolutionary RFID SCRABBLE board which is used to broadcast live tournaments to online viewers nationwide. For additional information on Mindsports International and the Mindsports Academy, visit mindsportsacademy.com.
About Hasbro
Hasbro (NASDAQ: HAS) is a global company committed to Creating the World's Best Play Experiences, by leveraging its beloved brands, including LITTLEST PET SHOP, MAGIC: THE GATHERING, MONOPOLY, MY LITTLE PONY, NERF, PLAY-DOH and TRANSFORMERS, and premier partner brands. From toys and games, television programming, motion pictures, digital gaming and consumer product licensing, Hasbro fulfills the fundamental need for play and connection with children and families around the world. The Company's Hasbro Studios and its film label, ALLSPARK PICTURES, create entertainment brand-driven storytelling across mediums, including television, film, digital and more. Through the company's commitment to corporate social responsibility, including philanthropy, Hasbro is helping to build a safe and sustainable world and to positively impact the lives of millions of children and families. Learn more at Hasbro.com, and follow us on Twitter (@Hasbro & @HasbroNews) and Instagram (@Hasbro).
SCRABBLE, the associated logo, the design of the distinctive SCRABBLE brand game board, and the distinctive letter tile designs are trademarks of Hasbro in the United States and Canada. ©2016 Hasbro. All Rights Reserved.