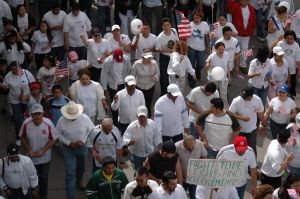 Brentwood, NY - April 11, 2014 - On Thursday evening, immigrants and allies from across Long Island joined together for a moving, and action-oriented, community forum that concluded a national day of action for immigration reform. At the event, held at St. Joseph’s Convent in Brentwood, local residents and representatives of various community organizations demanded that the House pass immigration reform within the next two months and called on Long Island Congressman Peter King to sign the discharge petition to allow a vote in the House of Representatives. Long Island's other Congressional representatives, Tim Bishop, Steve Israel, and Carolyn McCarthy, have already signed the discharge petition.

Teresa Farfán, a member of Make the Road New York, said, "As a Long Island immigrant, I’m not going to stop fighting until we get immigration reform. I implore Congressman Peter King to show his leadership in the House to ensure a vote. Every day that passes without reform, our community suffers more and more."