Cathy and Robert Horvath, licensed wildlife rehabilitators, will have to find new homes for some of their rehabilitated but unreleasable creatures, such as their bobcat, Tasha. 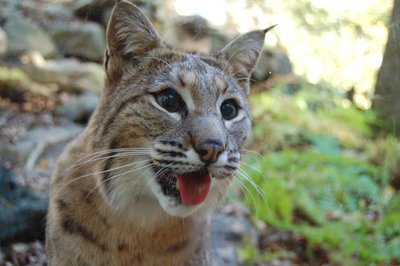 A North Massapequa couple that runs a nonprofit organization that rescues and rehabilitates wild animals are being told by the police that they have to give up their animals due to a violation of town code, as well as complaints from neighbors.

Robert and Cathy Horvath are both licensed wildlife rehabilitators that respond to animal emergencies in addition to working their full-time day jobs (Robert is a fireman, and Cathy is a veterinary technician). The two lead with volunteers in Horvaths’ nonprofit, Wildlife In Need of Rescue and Rehabilitation, which was created over 20 years ago and is federally licensed, as well as licensed through the state.  WINORR is housed on their 6,000 square-foot property, where they keep some of the critters that have been rehabilitated but cannot be returned into the wild, including seven hawks, two turkeys, and a bobcat named Tasha, who was rescued from a fur farm and has been with the Horvaths for 20 years.

It is the Horvaths’ menagerie that had neighbors talking, and some have complained about feeling endangered by having a bobcat housed to close to their homes.  After receiving a formal complaint, town officials dropped by the organization and found that the kinds of wildlife that the Horvaths are housing are in violation of town code.  They will be forced to move their operation elsewhere, and the town claims that they will be given a flexible timetable in which to find homes for the animals.

The couple documents their rescues with photographs and videos, which they post on their Facebook Page “WINORR- Wildlife In Need of Rescue and Rehabilitation.”