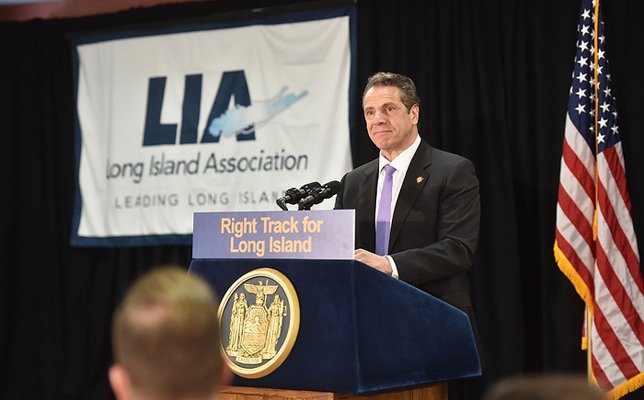 Albany, NY - April 10, 2017 - Governor Andrew M. Cuomo today signed legislation raising the age of criminal responsibility to 18-years-old, ensuring that young people in New York who commit non-violent crimes receive the intervention and evidence-based treatment they need.  The legislation was passed as part of the FY 2018 Budget, and marks a major accomplishment in the Governor’s efforts to ensure a more fair and equitable justice system.
New York was previously one of only two states in the nation that automatically processed all 16- and 17-year-olds as adults in the criminal justice system, no matter their offense. The Governor signed the legislation at the NYC Mission Society, joined by Soffiyah Elijah, Executive Director of the Alliance of Families for Justice, Akeem Browder, Rev. Al Sharpton, and other leaders in the social justice movement.
"By raising the age of criminal responsibility, this legislation will reduce crime, recidivism and costs to the state, and help us deliver on the New York promise to advance social justice and affirm our core progressive values," Governor Cuomo said. "Providing young people with age-appropriate facilities and rehabilitation will restore hope and promise and help them turn their lives around to build a better future for themselves, their families and for our great state."
Without age-appropriate facilities and programs, teenagers face a greater risk of being involved in a significant assault, being a victim of sexual violence and committing suicide, with juveniles who are confined in adult facilities five times more likely than the general population to commit suicide.
Youth who are processed as adults have higher recidivism rates than those processed as juveniles, and young people who are transferred to the adult criminal justice system are 34 percent more likely to be re-arrested for violent and other crimes than youth retained in the youth justice system. It is estimated that raising the age of criminal responsibility will prevent between 1,500 and 2,400 crimes every five years.
Incarceration of 16- and 17-year-olds falls disproportionately on youth of color. Black and Hispanic youth make up 33 percent of 16- and 17-year-old youth statewide, but 72 percent of all arrests. Of the teenagers who commit crimes, a vast majority of them are non-violent.
The new measures will be phased in over time, raising the age of juvenile delinquency from age 16- to 17-years-old beginning on October 1, 2018, and subsequently raising the age of criminal responsibility to 18-years-old on October 1, 2019.
Young people will no longer be permitted to be housed in adult facilities or jails. Young people under the age of eighteen will no longer be placed or held at Rikers Island in New York City no later than October 1, 2018. They are to be placed in specialized juvenile detention facility certified by the New York City Administration for Children’s Services and the State’s Office of Children and Family Services, and in conjunction with the State’s Commission of Correction and the New York City Department of Corrections.
The state will also create a Raise the Age implementation task force, with committee members designated by the Governor. Additionally, individuals who have been crime free for ten years after serving a sentence will be able to apply for the sealing of previous criminal convictions.