Old Bethpage Restoration Village will open its doors to the public and host a World War II encampment complete with living historians, tanks and artillery during the weekend of May 19th and 20th. 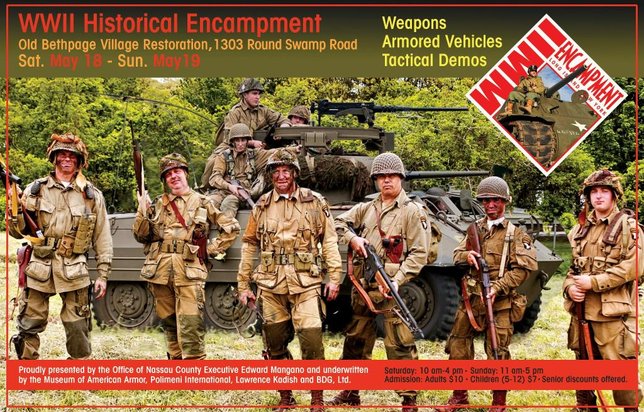 Old Bethpage, NY - April 10th, 2013 - In tribute to every American G.I. who has defended our nation, Nassau County Executive Edward P. Mangano has announced that Old Bethpage Restoration Village, located at 1303 Round Swamp Road in Old Bethpage, will open its doors to the public and host a World War II encampment complete with living historians, tanks and artillery during the weekend of May 19th and 20th. The living history program will be open from 10:00 a.m. to 4:00 p.m. on Saturday, May 19th and from 11:00 a.m. to 5:00 p.m. on Sunday, May 20th.

Old Bethpage Restoration is situated on 209 acres and the recreated 19th Century village offers a perfect impression of a rural European battlefield when American soldiers took on and defeated the Nazi Third Reich. Living historians in period gear representing a variety of forces will present vintage weapons and offer hands on displays while engaged in tactical exercises. An operational Sherman tank on loan from the Kadish Museum of American Armor will provide cover for infantry while reconnaissance vehicles from the American Airpower Museum offer flanking support. Also expected to be on display is artillery that includes a rare 155 mm “Long Tom” howitzer. Overhead a period fighter will look for enemy forces.

Additional military vehicles from the New York Military Vehicle Club will also be on hand for display and demonstrations.

Among the lead organizers of this encampment, Jim Michaud, stated, “It is our goal to remind and educate the public of the sacrifices made by their fathers and grandfathers. Visitors will explore the life and times of the average soldier, sailor or marine as well as that of our allies. In addition to weapons and tactical demonstrations throughout the weekend we will offer activities that specifically engage children. We hope to welcome many who want to see how our `Citizen Soldiers’ were equipped to defeat the Axis.”

Applauding the effort to bring visitors to Old Bethpage Village Restoration through the World War II Encampment Weekend is Dr. Libby O’Connell, Chief Historian of the History Channel. “Whether it’s Lincoln in Illinois or the Red Baron outside of Rhinebeck, there is no question that heritage tourism has become a multibillion dollar industry throughout the United States.This effort reminds us that creativity, volunteerism and the cooperation of local government can create enormous dividends in effort to educate a new generation of Americans regarding our nation’s heritage.”

This winter Dr. O’Connell presented County Executive Mangano with a check towards restoration efforts at the Old Bethpage Village Restoration.

Admission is $10.00 for adults and $ 7.00 for children. For more information about the Nassau County Parks, Recreation and Museums Department, please call: (516) 572-0420 or visit the website at: www.nassaucountyny.gov/parks.