Suffolk County Legislator Kevin McCaffrey joined with his colleagues to honor a group of exceptional women from across the County on March 22nd, 2016. 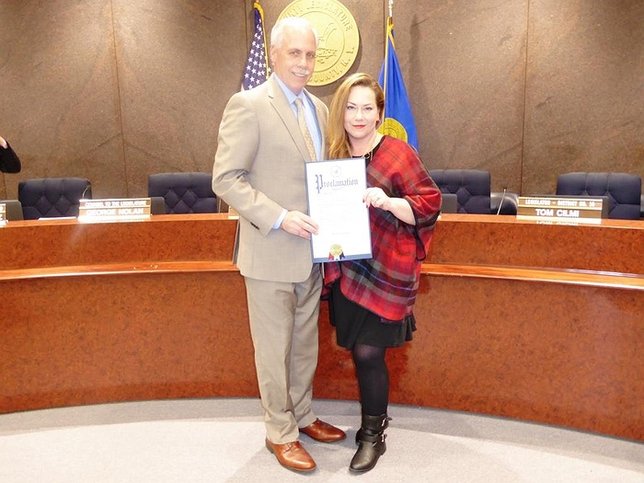 Suffolk County, NY - April 6th, 2016 - Just prior to the opening of the Legislature’s March 22nd general meeting, Suffolk County Legislator Kevin McCaffrey (R-Lindenhurst) joined with his colleagues to honor a group of exceptional women from across the County.

When McCaffrey was asked to choose a nominee from his legislative district, one individual immediately came to mind – Michele Insinga.  Michele quickly made a name for herself in the trying days that followed Superstorm Sandy’s landfall.

Being a natural leader and possessing a civic-minded heart, she became one of the leading figures in Adopt-a-House, a non-profit organization dedicated to providing relief and education to Superstorm Sandy victims.

“Michele is a leader in every sense of the word,” said McCaffrey.  “In the face of utter destruction in our community, she was a unifying force between elected officials, government agencies, the private sector, and the residents.  Her efforts, fueled by her inner strength and unwavering commitment to her neighbors, acted as a powerful catalyst for recovery.”

Much still needs to be done in the Sandy affected neighborhoods, whether it is the ongoing elevation and repair of homes, or securing funds for the victims through various government and/or private programs.  Michele and Adopt-a-House have to some degree become the de facto watchdogs of this lingering struggle that is likely to continue for some time.

“As the current Executive Director of Adopt-a-House, Michele is making sure that its advocacy projects don’t lose any steam,” added McCaffrey.  “The people of Suffolk County are lucky to have Michele, and we are all a little stronger thanks to her efforts.”

To learn more about Adopt-a-House, its activities, and how you can help the effort, please visit their website.