The dolphin was lifted onto a kayak and dragged approximately 300 ft. through knee deep mud to an open area of water. 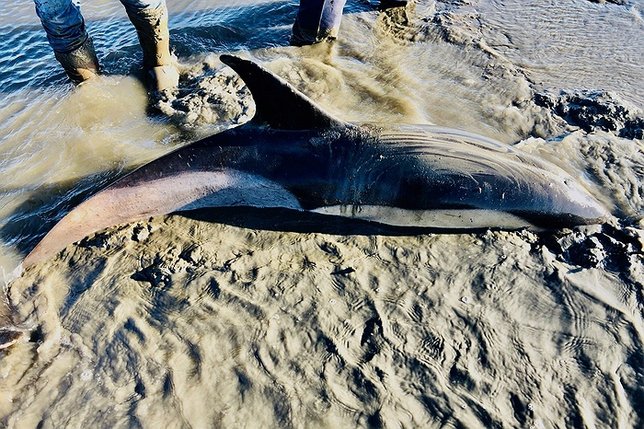 The Public Information Office reports the details of an Animal Rescue that occurred recently in Manhasset Bay.
According to Police, officers responded to a 911 call for a stranded dolphin. Upon arrival, officers determined the mammal was stuck due to the low tide.
A civilian was with the dolphin and 6th Precinct Sgt. Vitiello and P.O. Owens entered the mud and made their way to assist.  Nassau County Marine Bureau P.O. Cassidy and P.O. Stassi responded to provide additional help. After assessing the situation, the dolphin was lifted onto a kayak and dragged approximately 300 ft. through knee deep mud to an open area of water.  The officers and civilian placed the dolphin in the water and made their way back to shore.  The water was deep enough for the mammal to swim.
Police Officers Cassidy and Stassi suffered multiple lacerations on their feet and were transported to an area hospital for treatment.
Members from Great Neck Alerts and Manhasset Lakeview Fire Departments were on a small boat attempting to guide the dolphin to deeper water.  A representative from The Department of Environmental Conservation and New York Marine Recue Center in Riverhead responded to evaluate the dolphin.