As an Air Force veteran, Ms. Bonacasa proudly served in the United States Air Force from 2002 through 2006. 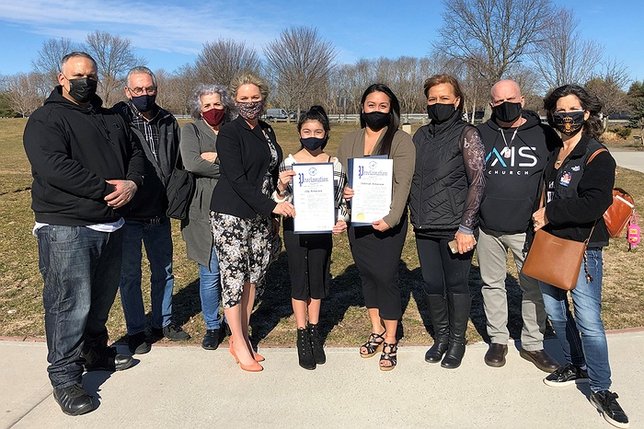 Photo by: Office of Legislator Anker

Suffolk County Legislator Sarah Anker recently joined the Bonacasa family at Mount Sinai’s Heritage Park to honor and recognize Deborah and Lily Bonacasa for their outstanding and impactful work within the community. This year, Deborah Bonacasa was Legislator Anker’s nominee for the Suffolk County Woman of Distinction Award. As established by Resolution 786-2002, every year in celebration of Woman’s History Month, each Suffolk County Legislator nominates a woman from their district to be considered to receive the county-wide Woman of Distinction Award. The recipient of the award is decided by the Suffolk County Women’s Advisory Commission and must be a woman who lives or works in Suffolk County and has a profound impact on the community through active volunteer work and leadership.
As an Air Force veteran, Ms. Bonacasa proudly served in the United States Air Force from 2002 through 2006, including a deployment to Balad AB, Iraq. In 2015, she and her daughter Lily, lost her husband, Lily’s father, while he was serving overseas in Afghanistan. Through her experience with grief and receiving support from her loved ones and her community, Ms. Bonacasa was inspired to create the SSgt Louis Bonacasa Memorial Foundation in honor of her beloved husband, SSgt Louis Bonacasa. The foundation seeks to raise money to donate to various organizations that support and empower local veterans. Under Ms. Bonacasa’s leadership, the SSgt Louis Bonacasa Memorial Foundation has been able to raise over $10,000 that has been donated to organizations like the Long Island ABATE. In addition to her work with the foundation, Ms. Bonacasa has also worked closely volunteering time and resources to a number of organizations including Gold Star Families, Tunnels to Towers, local food pantries, Veterans of Foreign Wars, fire departments, and civic organizations.
“It was my distinct honor to nominate Deborah Bonacasa for the 2021 Suffolk County Woman of Distinction award in recognition of her outstanding leadership and tireless volunteer efforts toward improving her community and supporting our local veterans,” said Legislator Anker. “She has deeply committed herself to providing support to veterans, those in active duty, reservists, Gold Star/Blue Star families, and other families and children in need. It is because of her passion for helping those in need who bravely served our country and her ability to move others to compassion and action, that I was pleased to nominate her for the Suffolk County Woman of Distinction award.”
In addition to honoring Deborah Bonacasa, Legislator Anker presented a proclamation to Deborah’s daughter, Lily Bonacasa, in recognition of her philanthropic work in the community through the holiday toy drive, Lily’s Toy House. The establishment of Lily’s Toy House was inspired by a conversation that Lily had with Santa when she was a second grader. Lily told Santa that she wanted to give a toy to a child who would not get one that year. That thought and Lily’s compassion led to the creation of the toy drive that since its establishment in 2019 has donated over 1,000 new unwrapped toys to children aged 1 to 17 years old in need in the community and has donated $1,000 to a Soldier's Child Foundation. A Soldier's Child Foundation honors the children of our country’s fallen veterans by celebrating their birthday every year through the age of 18.
“It is my honor to recognize Lily Bonacasa along with her mother, Deborah,” said Legislator Anker. “Lily has brought joy to so many children in need in our community during the holiday season. As a bright, dedicated and compassionate young woman, I know that she will continue to positively impact our community.”
For more information, about the SSgt Louis Bonacasa Memorial Foundation or Lily’s Toy House, please visit https://www.keepbonesalive.org.