2019 Budget Allocates $1 Million for Additional Wage and Hour Investigators; Marks an Increase of Over $1.3 Million Returned to More Than 9,000 Additional Workers from 2016. 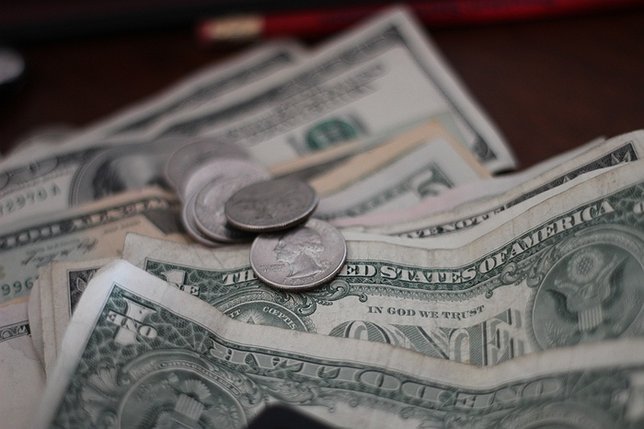 Photo by: Mathieu Turle on Unsplash

Albany, NY - April 3, 2018 - Governor Andrew M. Cuomo today announced that $35,370,000 was returned to 36,446 victims of wage theft in 2017. In addition, $1 million in continued funding was secured in the FY 2019 budget to support the expansion of the Department of Labor's staff of investigators. In 2016, $34 million was returned to 27,420 wage theft victims, marking an increase of over $1.3 million returned to an additional 9,026 victims. Since Governor Cuomo took office, the state has recovered and returned $258.4 million to 215,335 workers - the highest total in the nation.
"We have zero tolerance for those who seek to rob employees out of an honest day's pay for an honest day's work," Governor Cuomo said. "These workers are commonly among the most vulnerable members of the New York family and I want them to know this administration is and will continue to do everything in its power to protect them from these unscrupulous tactics and to ensure they are paid what they are owed."
Building on the success of the first-in-the-nation Exploited Workers Task Force created in 2015, Governor Cuomo issued Executive Order 159 in July 2016, establishing a permanent Joint Task Force on Employee Misclassification and Worker Exploitation. The Executive Order merged three existing multi-agency task forces to coordinate cross-agency efforts designed to protect workers in a variety of industries where victims of abuse do not come forward for fear of retaliation, many of which are immigrants. These individuals are often subjected to unsafe or unsanitary working conditions; long and irregular work hours; and illegal deductions for supplies, training, and uniforms. Additionally, they tend to work off the books, have dangerous jobs, and are often geographically isolated.
To further wage recovery efforts, Mediation and Anti-Retaliation Units were developed within the Department of Labor. The Mediation Unit attempts to expedite resolutions so that workers receive the money they're owed more quickly, while the Anti-Retaliation Unit acts on behalf of workers who are subject to unfavorable action against them for filing a complaint about labor law violations or reporting them to the authorities.
State Labor Commissioner Roberta Reardon said, "The New York State Department of Labor is committed to the protection of workers. Under Governor Cuomo's leadership, we've taken unprecedented action to ensure that those who have wages stolen get what they're owed and I applaud the dedicated investigators who have helped build New York's reputation as a national leader in the fight against wage theft."
The following table provides a regional breakdown of the victims of wage theft and prevailing wage underpayments in 2017: 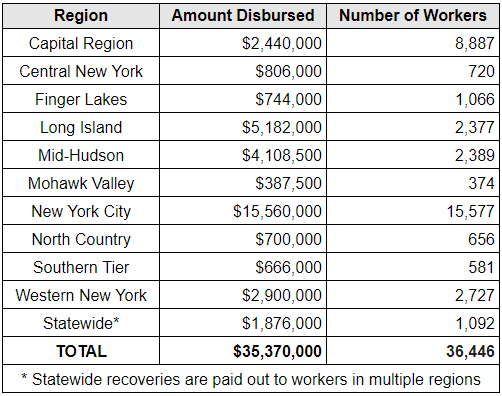 Some of the most common ways employers steal wages include:
Prevailing wage is the minimum pay rate set by law for employment on public work projects. This applies to all laborers, workers or mechanics employed under a public work contract. The New York State Department of Labor's Bureau of Public Work is responsible for enforcing the law and determining the wage schedule for each individual region. Employers must pay the prevailing wage rate set for the locality where the work is performed. Should a violation of the prevailing wage law occur, the Department of Labor has the authority to ban individuals or businesses from bidding on public work projects for a period of up to five years.
Anyone who wishes to file a wage theft complaint is encouraged to call 1-888-4-NYSDOL. More information on prevailing wage can be found here and debarment information, including information on debarred entities can be found here.
If you have information about potential prevailing wage fraud, please visit the Department of Labor website to contact the office nearest you.