The parade will follow a 6.5-mile loop beginning and ending at Hofstra University. 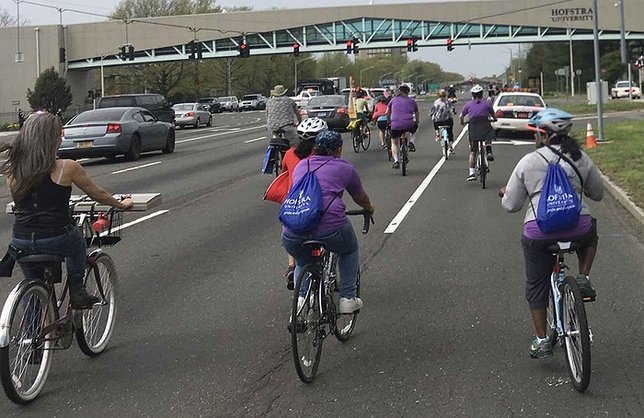 Hempstead, NY - April 3, 2018 - The Long Island alternative transportation advocacy organization, Car-less Long Island, is holding its second annual Long Island “Bike-to-Work Parade” on Saturday, April 28. Gathering for the parade begins as 9 a.m. at Hofstra University’s North campus.
The parade will follow a 6.5-mile loop beginning and ending at Hofstra University. There will be a route for pedestrians, disabled participants, cyclists with younger children and cyclists who simply would prefer a shorter ride. Participants are encouraged to dress up and adorn their bicycles. There will be a festival with prizes for the best costumes and bikes at the end of the parade.
“There are many reasons why Long Islanders should support alternative forms of transportation, such as biking,” says Car-less Long Island founder and chair Sylvia Silberger of Hempstead. “Clearly it is much more environmentally friendly and bicycle commuters are able to incorporate a healthier active life-style into their daily routine. But also, it reduces vehicular congestion, benefitting all motorists, and many studies have shown that walk- and bike-ability helps local businesses thrive.” Silberger says there are many Long Islanders who need alternative forms of transportation because do not drive or own their own cars. “We all benefit if everyone as access to the transportation necessary to survive in this world,” she added
Car-less Long Island (CLLI) was founded in the summer of 2015 as a project of the Ethical Humanist Society of Long Island. “It seems I have often found myself in conversations with other Long Islanders who would like to be able to get around without a car, but are frustrated by the danger and inconvenience inherent alternative modes of transportation,” says Silberger. She founded CLLI to counter the “nihilistic feeling that this is just how Long Island is – we are a car-culture and that will never change.” Silberger is optimistic that the Bike-to-Work Parade will allow Long Islanders who would like Long Island to be a more bike-friendly community realize that they are not alone.
Participation in the parade is free, but participants are encouraged to register in advance at http://www.Car-LessLI.org/parade. More information about the parade, such as maps and how to volunteer or sponsor the event can also be found on that page.